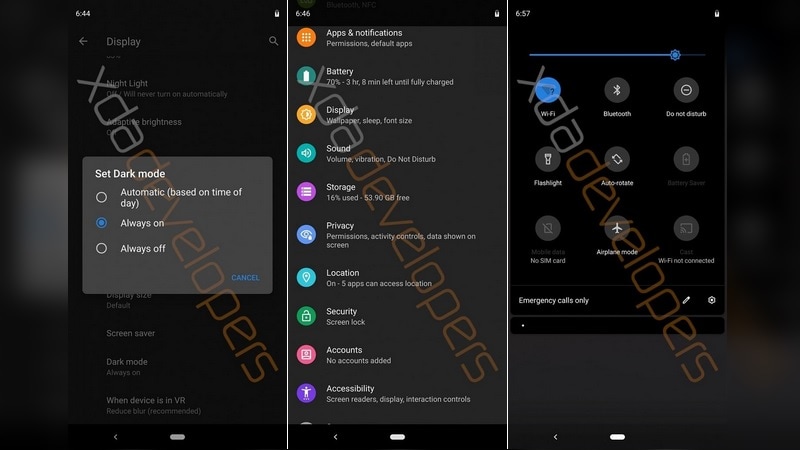 Android Q is still months away from its official announcement, but a leaked build has already spilled the beans on a ton of features that will arrive with it. An in-depth analysis of the leaked Android Q build, which was reportedly created in January and had the Android Q security patch for February, has suggested that the upcoming major Android refresh will bring features such as a system-wide dark mode, more privacy controls when it comes to app permissions, a ton of new developer options and accessibility tools among others. Now, apart from screenshots reported earlier this week, the same report has included a video that details the changes.

The leaked Android Q build that was detailed by XDA Developers is now featured in a video, which is essentially a rundown of the features we saw earlier this week, but does showcase a few new things. We see that in the leaked build of Android Q, users will now have to slide notifications towards the right to dismiss them, while sliding them towards left would open icons for snooze and notifications buttons. Also new, is how apps are arranged in the permissions section. Now, in the permissions section, checkmark toggles depicting an app's permission status have been removed in favour of a redesigned view for each app which clearly mentions why the particular app requires the permissions in the first place. This should help users to view app permissions with ease and also choose to restrict which permission they want to grant or deny.

Getting back to the other new features we saw in the earlier analysis of the leaked build, the most prominent one is a system-wide dark mode which imparts a dark aesthetic to UI elements like the launcher, settings as well as third-party app notifications. A similar developer tool called ‘override force dark' can even apply a dark theme to apps which lack native dark mode support. It must be noted that Android Q's system-wide dark mode was first discovered in a Chromium bug tracker post earlier this month.

As we mentioned, another noteworthy change Android Q appears set to bring is a more privacy-focused approach when it comes to app permissions and will also introduce a redesigned permissions menu. This might have something to do with Google's updated privacy guideline asking developers to justify why their apps require certain permissions and how those permissions are relevant to the app's core functionality. This is certainly a neat addition, as it will allow users to get more information about an app's behaviour. In Android Q, it appears users can also identify when an app is using location data by checking for a separate location icon that appears in the status bar.

The leaked Android Q build also has the mention of a tool called ‘force desktop mode' which might well introduce a functionality similar to DeX by Samsung. Android Q will also come with a ton of new developer tools such as a flag for enabling a native screen recorder, a feature for choosing graphics driver listed as ‘Game Update Package Preferences' and a flag for activating the in-built screen recorder among others. Moreover, Android Q also seems set to tweak the location of certain tools, aside from introducing a slightly reworked iconography with a redesigned Wi-Fi symbol and the one for connected devices in the settings menu. Another feature called ‘Role', which on being tapped opens a list of controls for SMS, browser, and gallery, was also spotted in the leaked Android Q build but its exact function is not known.

Talking about accessibility features which might arrive with Android Q, ‘Time to read' and ‘Time to take action' will be among the new features that will allow users to decide how long they want a message to be visible on the screen. A redesigned appearance of app installation pop-up dialogs, a ‘sensor off' feature for disabling all sensors and new file sorting standard are the other minor changes which might arrive with Android Q. However, do keep in mind the changes and new features mentioned above were spotted in an early Android Q build, so many of them might not actually make it past the experimental phase and arrive with the stable update.