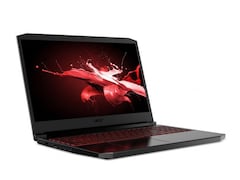 Back in April, Acer refreshed its gaming portfolio of laptops and also introduced a few new models. One of them was the Nitro 7, a new series in the Nitro gaming laptop family, designed to offer a more premium experience compared to the Nitro 5, for the casual gaming crowd.

The Acer Nitro 7 doesn't have a flashy design, which is something we really like. The monolithic build looks slick, and the black paint job doesn't attract smudges very easily. The 15.6-inch IPS display has a full-HD resolution (1920x1080) and a 144Hz refresh rate. We found the brightness to be more than adequate for indoor use.

The chiclet-style keyboard keys are well spaced and have good travel, which makes them responsive for typing. The keys have red backlighting, with four levels of brightness. The Nitro 7 doesn't offer easy access to the RAM and storage, so you'll have to remove the entire base, which is held in place by Philips screws.

Windows 10 was quick to boot, apps loaded quickly, and the 144Hz refresh rate made everything feel snappy and fluid. The display panel produced good colours and the brightness was more than adequate for indoor use. The Nitro 7 also ran quiet and didn't get too hot when we weren't doing anything intensive. The top-end spec that we reviewed also delivered a very enjoyable gaming experience.

Even though Acer claims battery life of up to 7 hours, we realistically managed about 4-5 hours of non-stop usage on a single charge, which is not terrible but could have been better.