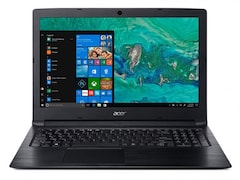 Gone are the days when you had to make a lot of compromises when shopping for a mainstream laptop. Today, you can find some pretty good deals for around Rs. 35,000. These laptops offer high-resolution displays, plenty of storage, and decent processing power.

The Acer Aspire 3 series has pretty basic build quality and design, which is typical for budget laptops. The lid does flex slightly in the middle when it's closed so you might want to be careful about placing anything heavy on top of this laptop. The 15.6-inch display on the Acer Aspire 3 has a full-HD (1080x1920) resolution, for a decent level of sharpness. It's a standard LCD panel, which means the vertical and horizontal viewing angles aren't very wide.

The keyboard area is spacious with ample room on either side for you palms. You get a full-sized keyboard with a number pad. The chiclet keys are well spaced, and have soft tactile feedback so they aren't noisy.

The Aspire 3 is powered by an Intel Core i3-8130U CPU, and comes with 4GB of DDR4 RAM, a 1TB hard drive. Along with Windows 10, Acer also preinstalls some of its own programs.

It still takes a while to boot into Windows, but once everything is loaded, the experience is workable. There's a bit of lag when switching between apps, opening programs, and even opening menus in the Windows UI, which is to be expected. The Aspire 3 doesn't run hot either, and the exhaust fan is only audible when running really intensive tasks such as playing a taxing 3D game or encoding a video.

The Acer Aspire 3 has a 4,810mAh battery, which is rated to deliver up to 7 hours of runtime. In our heavy Battery Eater Pro test, the laptop ran for 2 hours and 31 minutes, which is decent.