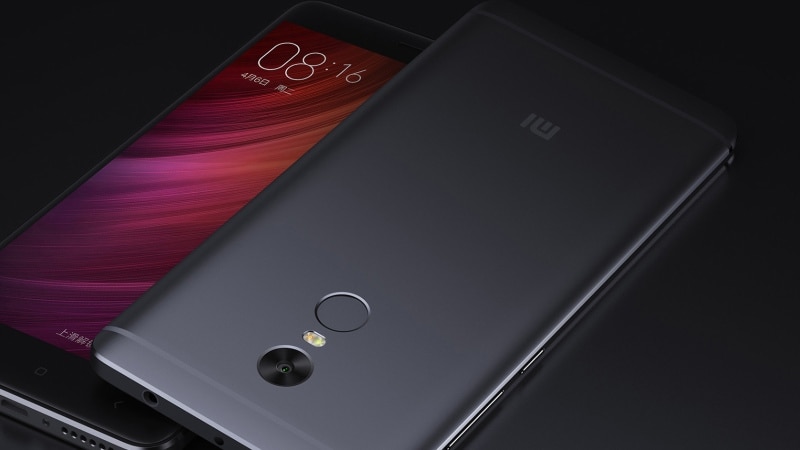 Xiaomi recently released a list of its phones which are destined to get the Android 7.0 update, but the Redmi Note 4 (Review) was mysteriously left out from that list. Now, a Flipkart teaser for the Big Xiaomi Redmi Note 4 Sale on August 2 mentions Android Nougat update coming "very soon," at the bottom of the banner. Although Xiaomi's spokesperson hasn't confirmed this, Gadgets 360 has learnt the Android Nougat build for Redmi Note 4 is in beta phase at the moment.

The Redmi Note 4 has been one of Xiaomi's more popular models in India and to mark its 6-month anniversary, Flipkart is hosting a special sale which will include offers like a 40 percent value back when the smartphone is exchanged within a period of 6-8 months. Redmi Note 4 buyers can also avail EMI facility and "Buyback Guarantee" for a price of Rs. 249 for all variants of the phone.

Nokia 8 Copper Gold variant leaked in new images
Leaks for the upcoming Nokia 8 are flooding in, and this time we have yet another shot of the Copper Gold version of the phone. The Nokia 8 smartphone made by HMD Global is all set to launch on August 16 at an event in London. The new phone is tipped to comes with a dual rear camera setup with Carl Zeiss optics and most likely have a top-end Qualcomm SoC. Romanian site mobilissimo.ro also reports that in Romania, Vodafone has listed the Nokia 8 for EUR 517.42 (roughly Rs. 38,900), which is slightly lower than the previously rumoured price of EUR 589 (roughly Rs. 43,400).

In other Nokia news, users of the Nokia 5 are reporting a strange issue with their units where they are unable to access the Dolby Equaliser settings when in certain music apps like Google Play Music or Spotify. HMD Global has since responded, and has confirmed that it is working on a fix for the issue.

Snapdeal terminates Flipkart acquisition talks
Talks about Flipkart acquiring Snapdeal initiated in March, but before things could be finalised, Snapdeal has called off the $950 million-takeover (over Rs. 6,000 crores) apparently over the complexity of the deal. A spokesperson from the company added that it will now pursue "Snapdeal 2.0" which is expected to help Snapdeal be "financially self-sustainable".

Snapdeal's chief executive and founder Kunal Bahl sent a letter to Snapdeal employees on Monday in which he encouraged them to aim for the bigger ambitions, saying, "We have a tremendous team, millions of loyal customers, hundreds of thousands of motivated sellers and a phenomenal platform that has been built with years of effort," Bahl wrote in the letter obtained by NDTV.

Micromax launches Selfie 2 smartphone in India
After listing it quietly on the company website last week, Micromax launched the Selfie 2 smartphone officially in India today. As you already know, the big highlight of the Micromax Selfie 2 is its front camera setup, its latest Android software, and the fingerprint scanner support at the back. The smartphone is priced in the country at Rs. 9,999 and will be made available in all major retail stores from August 1. Other specifications include a 5.2-inch HD display, MediaTek quad-core SoC, and 3GB of RAM.

Apple iPhone 8's features spotted in HomePod firmware
Apple itself has left a clue about what you could expect in at least one of the iPhone models it plans to launch later this year. In its smart speaker HomePod’s firmware is a face unlock feature for the iPhone, which would allow customers to get past the lock screen by just looking at the phone. The codebase also mentions an infrared camera, which could be there to detect a user’s face in the dark. The existence of these references lends further credibility to several reports from earlier that suggested that Apple is planning to ditch the Touch ID fingerprint scanner on at least one of its upcoming iPhone models, potentially the iPhone 8.

Apple's iTunes may finally be getting 4K HDR support soon as few users in the UK spotted a 4K HDR listing for recently-purchased films, stated a report. Some films like Fantastic Beasts and Where to Find Them as well as Passengers showed copies of the film as 4K HDR, AppleInsider reported on Saturday.

WhatsApp beta for Windows Phone tips new features
Microsoft may have officially ended support for its Windows Phone OS but that hasn't stopped developers from continuing app updates for the platform. WhatsApp beta for Windows Phone recently received an update that upgraded the version number to 2.17.234 along with features like verified profiles of business users. The WhatsApp beta update also disallows users to add a "check mark" symbol in front of their name in the app, which is being speculated to have been done in order to avoid confusion regarding the authenticity of the businesses in the future.

OnePlus 5 'emergency call bug' fix reportedly introduces a new problem
OnePlus recently fixed an issue which caused the OnePlus 5 (Review) to reboot when a user dials '911', the emergency hotline for the police in the US. However, the recent fix is reportedly causing an adverse effect on battery life, according to several users on the company's official forum. Some users have complained that their smartphone loses around 20-25 percent battery during night time in idle state even when the doze mode is switched on. The company is yet to respond on this new issue.

Broadcom Wi-Fi chip flaw threatens 1 billion smartphones
Broadcom is one of the biggest suppliers for components that go into your smartphone and a newly found bug in its Wi-Fi chip might leave about a billion phones vulnerable to attacks. The Exodus Intelligence's Nitay Artenstein exposed and demoed a critical flaw in the chip that let the hacker gain remote execution access on smartphones. Thankfully, Google and Apple have both fixed the bug before anyone could take advantage of this exploit, but devices that haven't been updated could still be at risk.

Facebook shuts down AI system after bots invent their own language
Days after Tesla CEO Elon Musk said Facebook co-founder Mark Zuckerberg’s understanding of artificial intelligence (AI) was limited, the social media company has reportedly shut down one of its AI systems because “things got out of hand”. The AI bots created their own language, from scratch, and without human input, forcing Facebook to shut down the AI system. The AI bots’ step of creating and communicating with the new language defied the provided codes. Scared yet?

Apple paid Nokia $2 billion as a part of a patent lawsuit
Following a patents row that escalated between Nokia and Apple in December last year, Apple has paid Nokia $2 billion (roughly Rs. 12,818 crores) upfront cash as part of the settlement terms. According to a report in TechCrunch on Friday, Nokia will not get $2 billion every quarter - this was non-recurring catch-up revenue and Nokia hasn't said what it plans to do with all this cash.