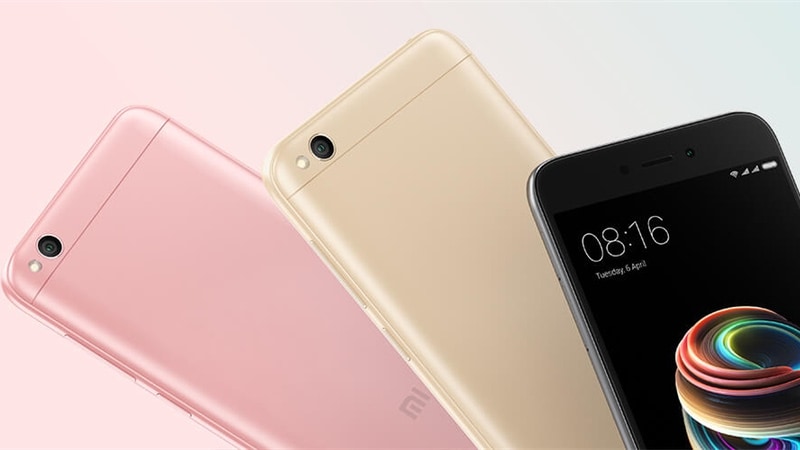 Xiaomi Redmi 5A was launched in India on Thursday, with a nice introductory pricing offer for the first five million units sold in the country. The smartphone was launched at a price of Rs. 5,999 for the 2GB RAM/ 16GB storage variant, but at launch the price will be Rs. 4,999 for the first five million buyers. The Redmi 5A will go on sale on Flipkart, Mi.com, and Mi Home offline stores in India on December 7 at 12 pm. There's another variant of the smartphone, with 3GB RAM and 32GB storage, which is priced at Rs. 5,999.

The price of the more expensive variant of the Xiaomi Redmi 5A will remain the same for the foreseeable future as the company has not announced any discounts. While this discount offer is quite straightforward, there's also a convoluted mess of an offer around if you want one. In this case, it's Reliance Jio's "additional Rs. 1,000 cashback" offer for the Xiaomi Redmi 5A. Think we're being harsh? Just wait until you try to decipher the fine print involved in this latest "effective price" gimmick.

To avail this additional cashback, Redmi 5A users will have to recharge their accounts with the Rs. 199 Jio pack for 12 months. After this, they'll get 10 vouchers of Rs. 100 each and these can only be redeemed one at a time on a recharge of Rs. 309 or above. See our point now? Sure, there's some kind of a discount involved here, but it arrives quite late and requires you to use 10 discount vouchers over 10 months, by which point you probably would've moved to a different smartphone and probably a different carrier too.

Vodafone announces 'Rs. 2,200 cashback' on some Micromax phones
Vodafone India has announced a tie-up with Micromax to offer cashbacks on some budget Micromax 4G smartphones. This offer is valid on the Micromax Bharat 2 Plus, Micromax Bharat 3, Micromax Bharat 4, and Micromax Canvas 1. If you thought the Jio Redmi 5A offer was complicated, prepare to be amazed as Vodafone's Micromax offer is just as convoluted. To avail this cashback, you will have to make recharges worth Rs. 150 per month for three years. After the first 18 months, you'll get a cashback of Rs. 900, and after three years, you'll get a cashback of Rs. 1,300. Both these cashback offers will be credited to your Vodafone M-Pesa wallet. Yes, we weren't kidding about the complexity of these offers.

Micromax to launch Bharat 5 in India
Micromax doesn't want to be left behind while Xiaomi launches one budget phone after another. The Indian smartphone maker is going to launch Bharat 5 in the country just a day after the launch of the Xiaomi Redmi 5A. If you go by the invite that the company has sent, you'd suspect that the smartphone has a huge battery, perhaps even 5000mAh and could feature fast charging. Micromax brought its Bharat range of smartphones to counter the surge of other affordable phones in the market, and it appears that Bharat 5 will be the latest effort in that direction.

This new Google app lets you keep data usage in check
Google has launched an app called Datally to help Android users keep an eye on mobile data usage. The app lets you track the data consumed by individual apps and lets you shut down data access for individual apps. It also gives you information on nearby public Wi-Fi networks, with some comments on the quality of these networks. Datally is clearly targeted at developing nations where data limits are small and people's ability to buy packs with lots of data is limited. Until very recently, this would've been very useful in India, but with the arrival of Reliance Jio and the subsequent competition in the Indian telecom market, large data caps have become quite common in the country. That makes Datally less useful, but it's still a good tool to have, one that makes us wonder why these features aren't built in on an OS level.

Panasonic Eluga C with 'bezel-less' display launched
Large displays with limited bezels have become the smartphone trend of 2017 and now even Panasonic has joined the party. The Panasonic Eluga C features a bezel-less display and a dual camera setup. The phone has been launched in Taiwan at a price of TWD 6,000, which is equivalent to Rs. 12,900. The Panasonic Eluga C features a 5.5-inch display that has ultra-thin bezels and comes with an HD (720x1280 pixels) resolution. The smartphone is powered by an octa-core MediaTek MT6750T SoC clocked at 1.5GHz, coupled with 4GB of RAM. Panasonic has provided 13-megapixel + 5-megapixel camera sensors at the back of the Eluga C and an 8-megapixel camera on the front.

Windows 10 now has 600 million active devices
Windows 10 is now running on 600 million active devices, according to Microsoft CEO Satya Nadella, who made the announcement at Microsoft's annual shareholders meeting, according to a report from GeekWire. The number includes the following devices: desktops, tablets, Xbox One consoles, HoloLens headsets, and Surface Hub devices, apart from Windows 10 Mobile smartphones. Microsoft has admitted that it won't be able to reach its goal of 1 billion active Windows 10 devices within three years of the operating system's 2015 launch.

Samsung is the world's largest smartphone brand: Gartner
Market research firm Gartner has claimed that Samsung took the top spot in smartphone sales globally in the third quarter of 2017. The company claimed that Samsung has a 22.3 percent market share in the smartphone market across the world, with Apple being a distant second at 11.9 percent and Huawei, with 9.5 percent, being in third place. Gartner added that global smartphone sales stand at 383 million units in the third quarter of 2017. It attributed Samsung's return to the top to Galaxy S8, Galaxy S8+, and Galaxy Note 8 sales.

Apple fixes embarrassing macOS security flaw
Apple has fixed a critical bug in macOS High Sierra, one that could give hackers total control of vulnerable machines. The company has announced that it will review its software development process  to ensure that this kind of a bug doesn't get shipped to people who use its products. Apple also apologised to all Mac users for this embarrassing bug, which just needed potential hackers to have physical access to vulnerable computer and let them have complete control over the computer without entering a password.

Snapchat unveils redesigned app
Snapchat has revamped its app to focus more on personal content than posts from publishers. The app now separates your feed into separate streams for publishers and your friends. Snapchat relies on algorithms to curate your feed based on your interests. The company has claimed that this change will also help publishers make more money on the platform, which has 178 million daily active users.

Android co-founder takes leave of absence from his new startup
Andy Rubin, a former Google executive who's best known as the co-founder of Android, has taken a leave of absence from his smartphone startup Essential, according to a statement from the startup. Online news outlet The Information had earlier reported that Rubin left Google in 2014 after an internal inquiry found that he'd entered into a relationship with a subordinate. After this report was published, Rubin went on a leave of absence from Essential, but the startup refused to reveal the length of his absence. Essential said Rubin asked for leave to deal with personal matters.