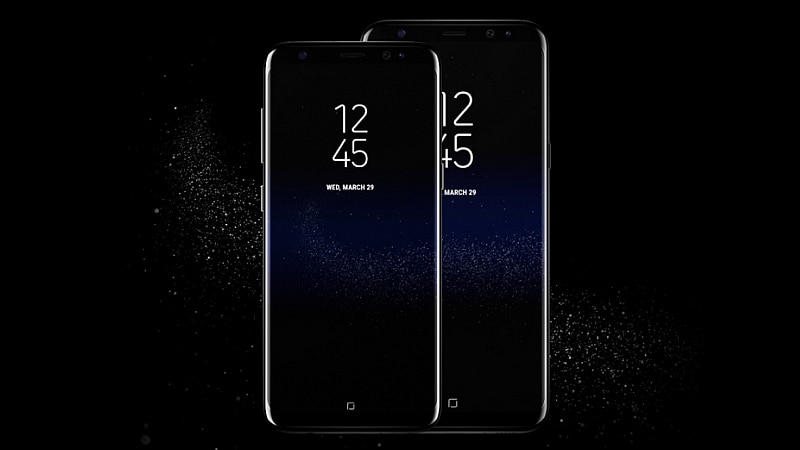 Samsung appears to be back with a bang after the Galaxy Note 7 debacle. After reports that the Galaxy S8 and Galaxy S8+ saw record pre-orders in Korea and the US, comes the news that pre-bookings of the two smartphones have hit 80,000 units within a week of the launch event in India.

Meanwhile Samsung has announced that updates to fix red-tinted screen and patchy Wi-Fi connections will roll out this week. And while the device is getting into the hands of more customers in the coming weeks, several teardowns have showcased what to expect. One from YouTube channel JerryRigEverything states that the front camera can move inside the module just like the one on the rear. This indicates that Samsung might have been working on optical image stabilisation (OIS) for the front camera, but didn't actually ship it. Samsung for its part declined to comment.

NASA's Cassini spacecraft plunges into the depths of Saturn
On the topic of galaxies and all things interstellar, Cassini, an unmanned spacecraft could give us a deeper look into Saturn. It’s a 20-year mission between NASA, the European Space Agency, and the Italian Space Agency. The first of Cassini spacecraft’s 22 deep dives between Saturn and its innermost rings occurred at 2:30pm IST on Wednesday. Communications with the spacecraft have gone dark and could make radio contact with Earth as early as 3:05am (12:35pm IST) on April 27.

"Images and other data are expected to begin flowing in shortly after communication is established," NASA said.

Launched in 1997, Cassini has been orbiting Saturn since 2004. With the spacecraft dangerously low on fuel, it will plunge into Saturn on September 15. At best, it could, in its final run discover life on Saturn. Or at the very worst would we just have more photos of Saturn’s beauty that would make apt wallpapers for our smartphones and desktops.

iPhone 8 concept shows off new features; Apple Watch 3 to use micro-LED screen?
Another day, another iPhone 8 leak. Despite being months away from launch, today’s rumour comes in the form of an iPhone 8 concept video. There’s an edge-to-edge OLED display, a front camera that’s almost hidden behind the display, a function bar at the base, and a fingerprint scanner embedded under the screen. A white variant is shown off with the back being ceramic. Not glass like the photos we’ve seen in the past. The iPhone 8 isn’t the only device from Cupertino that’s receiving a rumoured upgrade. The Apple Watch 3 (and later iPhones) may use a micro-LED screen, if leaks are to be believed. Which could mean the company’s dependency on Samsung for OLED screens may be a temporary solution.

"Apple has been working with LuxVue (which it acquired in 2014) to develop new micro-LED screen production in the two years since the technology began gaining public attention in the 2015," Apple Insider reported on Wednesday, citing a Business Korea report.

WhatsApp for business will see India playing a 'crucial role'
It’s not new that WhatsApp is a big part of most people’s lives in India. Taking a leaf out of WeChat in China, the Facebook-owned company is looking at ways to allow users to interact with businesses on WhatsApp directly. What’s more is that it claims India will play a crucial role in its foray into business solutions.

"...we are definitely in building the product phase. So, what you will see over the year is different tests, both for small and large businesses, and figuring out what's a good experience for these businesses on WhatsApp," WhatsApp spokesperson Matt Steinfeld said.

He further said: "India is going to play a crucial role in that."

Facebook releases Reactions for Facebook Lite, India-specific effects for Facebook Camera
During an event in Delhi on Wednesday, Facebook unveiled a few features specific to India. For one, the Reactions feature, which it claims have been used over 300 billion times on Facebook posts, will be rolled out to Facebook Lite. This is the company’s lightweight Android app for markets like India where Internet connectivity isn’t the greatest.

In an unrelated announcement, Facebook Camera is getting India-specific camera effects for India such as Namaste and geo-specific experiences for cities like Delhi, Goa, and other popular Indian locations.

In a statement, the company said, "India is a very important country to Facebook, and we're proud to have more than 184 million monthly active people in India who use Facebook to connect with their friends and family, and to build supportive communities online and offline."

Improvements include the addition of more call-to-action buttons, new system sounds, and using Continuum to lock and turn off the phone screen. Cortana gets a new UI as well as access to more system functions. Furthermore, Microsoft Edge gets the ‘set aside tab’ feature that’s been on PC as well as a separate bookshelf section and a ‘read aloud’ feature for those with poor vision.

Star Wars: Episode IX release date announced
The Last Jedi may have just got a trailer a couple of weeks ago along with a December release date, but you won’t be waiting till the end of 2019 for the final chapter in the new Star Wars trilogy. Disney and Lucasfilm announced that the third and final chapter of the new Star Wars trilogy, Star Wars: Episode IX, will release on May 24, 2019. What this means is fans will be getting closure with this specific story arc sooner than anticipated. At the same time, this also impacts the Summer lineup that just got a lot more crowded for other movies.

Google Maps can now remember where you parked your car
Google Maps has a new feature that lets you save the location of your parked car. The new ‘save your parking’ location feature was a part of Google Maps beta last month and now is being rolled out to all users on Android and iOS. Aside from saving your parking location, it allows for details like level and car parked spot. And if you’re in a location with a paid parking meter, you can set the amount of time before it expires and set a reminder to alert you 15 minutes before expiry. Also, an image of the parking spot can be saved and sent to friends as well.

Lenovo may shut down Zuk brand in a few weeks: Report
According to analyst Pan Jiutang, Lenovo’s Chinese sub-brand Zuk Mobile will be shutting down in the next few weeks. Fuelling this is a post from Weibo user Old Cool stating that Lenovo would not launch the Zuk Z3, to which the analyst replied that the entire Zuk vertical will be shut down in weeks to come.

If true, it would result in Zuk possibly closing down in just 23 months of being in business. It could also mean that it would combine with Lenovo and Moto to form a new brand. Presently Lenovo is marketing Moto smartphones as is, and future phones will continue to use the Moto 'bat wing' logo. Probably in an attempt to leverage Moto’s legacy as much as it can.

Even if this comes to pass, Zuk’s UI would live on. Reason being, Lenovo's Vice-President Alex Chen Yu recently confirmed that upcoming Moto smartphones would use Zuk's ZUI skin.