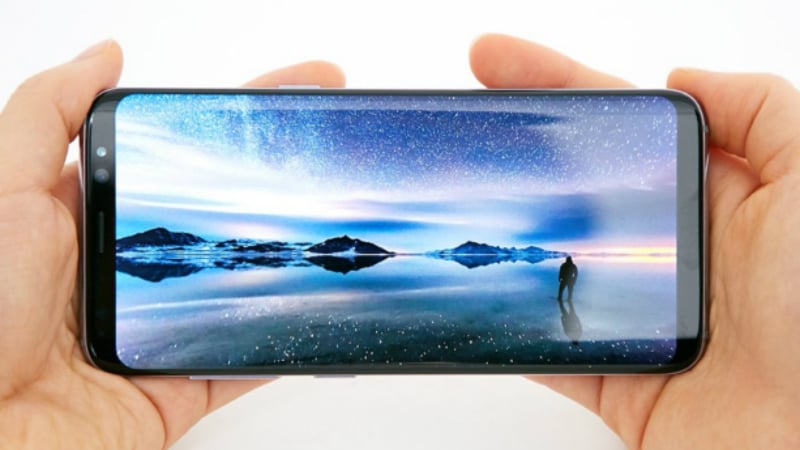 Samsung Galaxy S8 launch stole the limelight today, with the smartphone finally going official after months of speculation and anticipation. The new Samsung Galaxy S8 and Galaxy S8+ have 5.8-inch and 6.2-inch displays respectively; both smartphones have curved, bezel-less Infinity Display design, Gorilla Glass 5, 2960x1440 pixel resolution, and 18.5:9 aspect ratio. The long-standing Home button gives way to on-screen buttons, and AI-based digital assistant Bixby is at the heart of both the smartphones.

The new Samsung Galaxy S8 and Galaxy S8+, which have a release date of April 21, run Android 7.0 Nougat operating system, and are powered by the octa-core Snapdragon 835 SoC. The smartphones come with 4GB of RAM, 64GB storage on board, 12-megapixel Dual Pixel camera with f/1.7 aperture, 8-megapixel front camera with f/1.7 aperture, USB Type-C, and a fingerprint sensor. The bigger model has a 3500mAh battery, while the smaller one comes with 3000mAh battery; both Samsung smartphones support fast-charging.

While the Samsung Galaxy S8 launch was the dominant force today, here are other top stories of the day:

Micromax Dual 5 with dual rear cameras launched in India
Micromax has launched the Dual 5, its first smartphone with dual camera setup, in India at Rs. 24,999. The new smartphone will be available on Flipkart, Micromax E-Store, and offline stores starting April 10. The highlight of the new Micromax Dual 5 is the dual camera setup with two 13-megapixel Sony IMX258 sensors on the back; the dual camera mode is active by default and enables other shooting modes such as Bokeh Mode and Low-Light Mode.

Amazon offers deals and discounts on OnePlus 3T, iPhone 7, and other smartphones
In the ongoing Amazon Mobile Carnival, the e-commerce player is providing deals and discounts on several popular smartphones, such as OnePlus 3T, iPhone 7, iPhone 7 Plus, and Xiaomi Redmi 4A. Those buying OnePlus 3T from the Amazon will get up to Rs. 1,250 cashback as Amazon Pay balance on choosing the credit card EMI option, and another Rs. 250 Amazon Pay balance on using the Prime Video app on the smartphone; in addition, they will get 14GB of data from Vodafone on recharge of 1GB, and Rs. 500 as credits for Kindle e-book purchases. Similarly, iPhone 7 and iPhone 7 Plus buyers will get discount of Rs. 10,000, while those buying Redmi 4A will get 28GB of 4G data and unlimited free calls on Idea network. There are discounts and deals on Moto X Force, Lenovo Z2 Plus, Moto G4 Plus, Nubia Z11 Mini, Samsung Galaxy On7 Pro, and Samsung Galaxy On5 Pro as well.

Oppo Noida office faces agitation after Chinese executive allegedly tears Indian flag
Oppo’s Noida office faced protests after one of its executives – a Chinese national – allegedly tore the national flag and threw it into the dustbin. A case for showing disrespect to the national flag has been filed against the executive, based on complaints by Oppo employees. Along with the employees, hundreds of people protested outside the company’s office and demanded the arrest of the executive, who is a production manager with smartphone brand.

2.5 million wearables shipped in India in 2016, says IDC
Market research firm IDC has said that 2.5 million wearable devices were shipped in the Indian market in 2016, with Goqii and Xiaomi dominating the entry-level segment. Shipments spiked in the third quarter, and went down in the following quarter. In Q4 2016, shipments of basic wearables (which account for a bulk of the shipments) declined by 23.9 percent. On the other hand, smart wearable shipments rose by 23.6 percent in the period, with products by Apple and Samsung leading the charge.

HTC U with ‘unique’ Edge Sense feature said to launch in April
The often-rumoured HTC Ocean will reportedly be launched with the moniker HTC U in April; the report says the upcoming HTC U will hit the global markets in May. The highlight of the smartphone is said to be the ‘unique’ Edge Sense feature that allows users to control certain functions by tapping on the metal edges on the sides. HTC U is said to feature a 5.5-inch QHD screen, Android 7.1 Nougat software, Snapdragon 835 processor, 12-megapixel rear camera, 16-megapixel selfie camera, 64GB and 128GB internal storage options, 4GB or 6GB of RAM, Daydream support, Sense Companion AI-based assistant, and USB Type-C port.