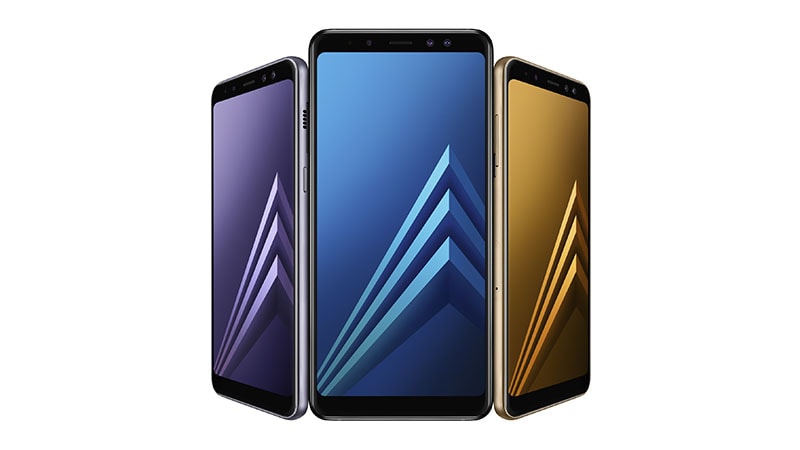 Samsung launched the 2018 updated variants of its Galaxy A8 series on Tuesday, simply called Galaxy A8 (2018) and Galaxy A8+ (2018), both of which riff on the company's well-known flagship, the Galaxy S8. That means they now have Infinity Display – Samsung's term for near bezel-less screen – to boot, IP68-certified dust and water resistance, and Gear VR and Samsung Pay support, along with a dual front camera setup, a feature not present even on the S8.

Battery on the Samsung Galaxy A8 (2018) is 3000mAh while the Galaxy A8+ (2018) packs 3500mAh. Internal storage options are 32GB and 64GB, which is expandable via microSD card. Both phones will be available in January 2018, and Samsung hasn't provided any pricing info just yet.

Meanwhile, the highly awaited Galaxy S9 and Galaxy S9+ have shown up in multiple leaks, that hint at the possible front and back panels, battery capacity, and release date of the phone. The pictures suggest Samsung has fixed the awkward placement of the fingerprint sensor from Galaxy S8, though the phones might not have a dual camera setup. Bloomberg says the Galaxy S9 and Galaxy S9+ launch is slated for late February.

Apple might be slowing down your iPhone
Apple might be deliberately slowing down older iPhones, according to data provided by performance testing firm Geekbench, a move that could invite severe backlash from users if confirmed. Essentially, data suggests, iOS throttles the performances of your device as the battery degrades, to ensure your phone can still make it through a day. Whatever be the reason, this does further add to users' fear of "planned obsolescence" on part of manufacturers. People who replaced the battery noticed an uptick in performance, something they were able to confirm via Geekbench.

Apple India has had a change of executives, with sales head Sanjay Kaul stepping down and being replaced by Michel Coulomb. The latter has led Apple in the Middle East, Africa, and Turkey, and was most recently chief of South Asia, based in Singapore. It's not clear Kaul's exit has anything to do with Apple's sluggish growth in India.

Vodafone launches another JioPhone competitor
Vodafone has partnered with China's Transsion Group-owned Itel Mobile to launch the Itel A20 in India, at an "effective price" of Rs. 1,590, though it's actually priced at Rs. 3,690. If you stick to Vodafone's network and the same handset for three years, and recharge your account with at least Rs. 150 per month for 36 months, you'll get Rs. 900 cashback after 18 months, and Rs. 1,200 more at the end of 3 years in Vodafone M-Pesa.

Ola buys Foodpanda India
Ola, India's chief rival to Uber, has acquired Foodpanda India to enter the business of food delivery, pitting it against the likes of Swiggy, Zomato, and UberEATS. Ola said it will invest $200 million (approximately Rs. 1,282 crores) into Foodpanda's India business over an undisclosed period of time.

Nokia 5 survives durability test, Nokia 6 gets Android Oreo beta
Nokia 5 performed well in durability tests undertaken by YouTuber JerryRigEverything, with the phone not getting scratched until level 6 on the Moch scale. The Nokia logo scratched easily, on the other hand, while the new glass protector for the rear camera ensured its safety.

Meanwhile, HMD Global has added the Nokia 6 to its Android 8.0 Oreo beta testing programme, with device owners now able to sign up and receive a beta build before the public launch next year.

Facebook takes aim at "engagement bait"
Facebook has decided to take strict action against posts it labels "engagement bait", which beg users to like, share or tag friends as means of voting or for a contest, in a bid to manipulate the social network's algorithms and climb the News Feed. Facebook Pages that regularly use these tactics will see a drop in traffic as these new rules take shape, but those that ask for help (charity) or advice (travel tips) will be left alone.

More Pixel 2 troubles
Some owners of the Pixel 2 and Pixel 2 XL have taken to Pixel User Community forum to complain about bundled headphone adapters (Google dropped the headphone jack this year) that don't seem to work. A post that began in October has been receiving comments ever since, with some who reported the issue to Google receiving functional adapters as replacements.

Two new budget smartphones
InFocus has launched the Vision 3 in India on Tuesday, a Rs. 6,999-phone that has a dual camera at the back – 13-megapixel primary, and 5-megapixel wide-angle secondary lens – along with a 5.7-inch 18:9 HD+ display, 4000mAh battery, and support for 4G VoLTE. The Vision 3 runs Android 7.0 Nougat, is powered by a MediaTek MTK6737H quad-core chip, and 2GB RAM. It'll go on sale exclusively on Amazon India, starting midnight on Wednesday.

Plex launches music player for Windows, macOS
The media player platform Plex has launched Plexamp, a music player for Windows and macOS, that takes inspiration from Winamp and modernises it. It's one of the first projects to come out of its experimental division Plex Labs. Plexamp is capable of playing any music format under the sun, supports media keys, remote control, and notifications, and can help take your music anywhere thanks to Plex itself.