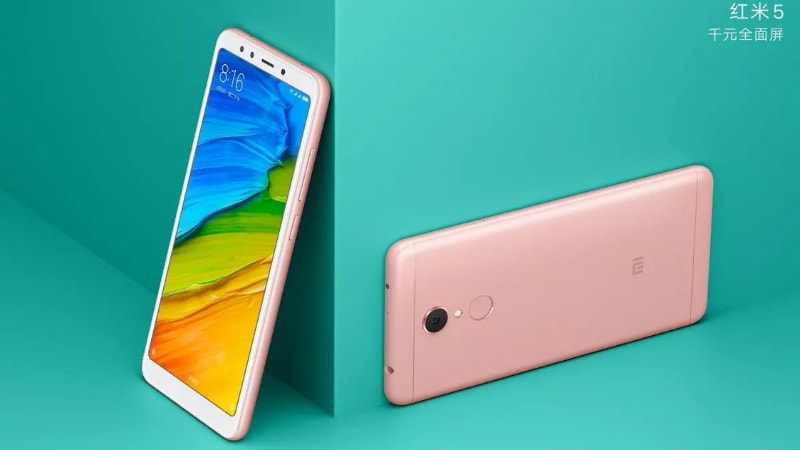 Xiaomi Redmi 5 and Redmi Plus were in the news once again as the handsets’ prices were leaked online via AliExpress listings. Posted by a seller named Xiaomi Online Store, the listings say the Redmi 5 price will be $199.99 (roughly Rs. 12,900) for the 2GB RAM + 16GB storage variant, while Redmi 5 Plus will cost $249.99 (roughly Rs. 16,100) for the 3GB RAM + 32GB storage option. We won’t have to wait too long to find out the official prices of the two Xiaomi smartphones as they are scheduled to officially launch on Thursday.

Qualcomm unveils Snapdragon 845 for Android devices, Windows 10 notebooks
Qualcomm has unveiled Snapdragon 845, its next flagship chipset, which will take over from the 835 as the most powerful piece of silicon for mobile devices the company has to offer. The company has announced that next year’s Xiaomi M7 will be the first smartphone with Snapdragon 845 inside, while phones by LG, Samsung and others will get it soon afterwards. Windows 10 notebooks based on ARM architecture may also be powered by the new Qualcomm chip. It will include the latest X20 LTE modem that supports gigabit connectivity on compatible networks, and will be manufactured in partnership with Samsung Foundry.

Airtel revises Rs. 349 and Rs. 549 prepaid plans
Airtel has updated its Rs. 349 and Rs. 549 plans to give customers more data and free outgoing calls on roaming. The Airtel Rs. 349 recharge pack for prepaid users offered 1.5GB data per day till recently, but has been revised to provide 2GB data daily. Similarly, the Rs. 549 pack will now offer 3GB data per day instead of 2.5GB. The other details of the two plans – including the 28-day validity and freebies such as free calls and 100 text messages per day – remain the same as before. Interestingly, the myAirtel app and the official Airtel website still mention the old data allocation for the two packs, but show the new daily limits when they are added to cart.

Android 8.1 Oreo update released for Google Pixel, Nexus devices
Google has released the Android 8.1 Oreo update for compatible Pixel and Nexus devices, a week after the final developer preview version for this version became available. Among the new features of Android 8.1 Oreo – available via OTA update as well as factory images – include the new search bar at the bottom in Pixel Launcher, adaptive light/ dark themes, and adaptive tint on lockscreen and home screen depending on the wallpaper. Other features users can look forward to are transparent Quick Settings menu, third-party access to Pixel Visual Core on Pixel 2, new Neural Network API, and autofill enhancements. Apart from these, the Android 8.1 build comes with the December security patch, which has more than 50 fixes.

Airtel partners with Intex over Mera Pehla Smartphone initiative
Airtel has added three more handsets to its Mera Pehla Smartphone initiative in partnership with Intex. The programme is aimed at reducing the effective prices of Android phones (in the form of cashbacks) to make them more affordable in order to lure first-time buyers away from Jio Phone to its own network. With this collaboration, Intex Aqua Lions N1 (MRP Rs. 3,799), Aqua A4 (MRP Rs. 4,999) and Aqua S3 (MRP Rs. 6,649) will see their effective prices drop by Rs. 1,500 over a 3-year period. As part of the offer, buyers will have to purchase Airtel recharges worth Rs. 3,000 in the first 18 months and another Rs. 3,000 in the next 18 months to get the Rs. 1,500 cashback from the operator.

LG V30+ India launch scheduled for December 13
LG V30+ will be launched in India on December 13, the South Korean company has announced. Like other V-series phones, this model has a Floating Bar that displays app shortcuts and can be disabled when not required. The flagship LG V30+ sports a 6-inch OLED FullVision display with QHD+ resolution, Android 7.1.2 Nougat-based custom skin, Snapdragon 835 chipset, 4GB of RAM, 128GB storage, 16-megapixel + 13-megapixel dual rear camera setup on the back, 5-megapixel selfie shooter in front, and a 3300mAh battery. It was unveiled at IFA 2017 in August and is pretty much identical to the V30, apart from the storage capacity.

Xiaomi invites Android 8.0 Oreo beta testers for Mi A1
Xiaomi has asked Mi A1 buyers to sign up to beta test the Android 8.0 Oreo build for the handset. All Mi A1 buyers are eligible to sign up for the beta test, and the company says they should ideally be active on the MIUI Global Forum, have an interest in testing beta builds, and possess some knowledge of ROMs. Interested buyers need the IEMI number of their handsets and the MIUI Global Forum app on their phones to sign up. Once selected, they will be required to share bug reports and answer queries on the Mi forum. To recall, Mi A1 is the first Xiaomi smartphone with stock Android.

Microsoft unveils Always Connected PCs with LTE chip, 20-hour battery
Microsoft showcased the first Always Connected PCs with built-in 4G LTE connectivity and longer battery life. These PCs, made by Asus and HP, run on ARM-based Snapdragon 835 chip and are being touted as the next big tech revolution by Microsoft. The Asus NovaGo will be the world's first Gigabit LTE convertible laptop and offer active battery life of 22 hours, while the HP Envy x2 will deliver 20-hour battery life and 4G LTE speeds. Both run on Microsoft's toned-down Windows 10 S operating system. A third Always Connected PC model, being manufactured by Lenovo, is also in the works.

Google pulls YouTube from Amazon Echo Show, Fire TV; Prime Video app for Apple TV launched
Google has said it will block YouTube access on two of Amazon’s products, Echo Show and Fire TV. The Internet search giant says it took the decision as the online retail titan does not sell Google products such as Chromecast and Google Home on its marketplace, last month stopped selling Nest’s new devices, and has not made the Prime Video app available for Google Cast users. Amazon declared that Echo Home and Fire TV users can access YouTube via the Internet. Both companies say they hope to resolve the issue, but who knows when that will happen. If you own either of these devices, don’t wait with bated breath.

On the other hand, Amazon has released a dedicated Prime Video app on the tvOS App Store for Apple TV 3rd Generation and later devices. It was expected that the Prime Video app release will mean that Amazon.com will start stocking Apple TV too, but the set-top box was not available on the marketplace at the time of writing.

Instagram Stories Archive, Stories Highlights features announced
Instagram has announced two new features to let users reuse their Stories. The Stories Archive feature lets users automatically save Stories so that they can be reshared as part of a new Story, shared as a post in feed, or added to a Highlight. Stories Highlights is a new space in the Instagram profile where archived photos will appear in a horizontal grid above the photo grid. The new feature will be rolled out to users from Instagram version 25 on Android and iOS.