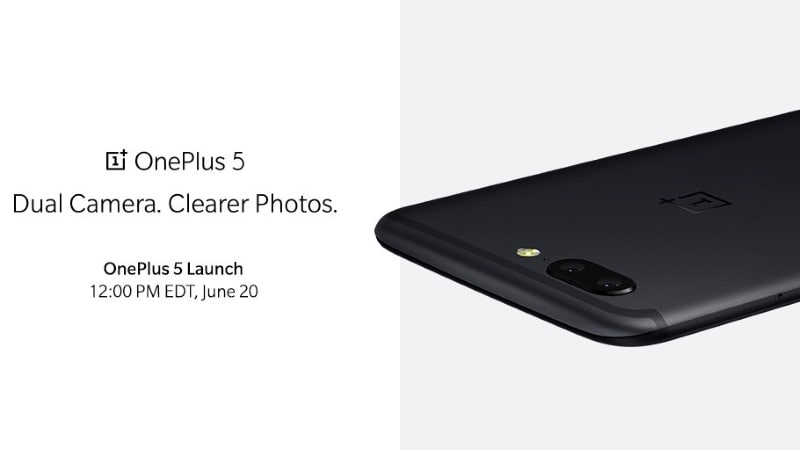 OnePlus has shown off images of its much-hyped OnePlus 5, and it looks a lot like the iPhone 7 Plus. This is the first official look at the device, and we can see antenna lines as well as a horizontal dual-camera bump on the rear. The OnePlus 5 model in question is black, and appears to have rounded as well as flat edges. The glimpse came courtesy of a tweet by OnePlus teasing the dual cameras, so we can probably expect to see more details over the next few days and weeks leading up to the launch.

Unofficially, there continue to be leaks, with the latest of them suggesting that multiple OnePlus 5 models will be available, with one key difference between them being the amount of RAM. Both 6GB and 8GB have appeared in online benchmark databases and in the source code of an Amazon India teaser page. The official OnePlus 5 launch date for India is June 22, and further leaks indicate that pricing will begin at Rs. 32,999 for a 64GB model, with a 128GB model also launching priced at Rs. 37,999. If true, this would make the OnePlus 5 considerably more expensive than its predecessors at launch, somewhat diminishing its appeal.

Vodafone Holy Ramzan Pack and other Ramzan offers
Vodafone has expanded its special Ramzan offers to circles outside UP West and Uttarakhand, where it first launched a few days ago. Subscribers in the Assam and North-East circles can now get 25GB of cellular data, unlimited national roaming, and unlimited voice calling at Rs. 786. All prepaid and postpaid Vodafone subscribers can also get a 50 percent discount on premium numbers that include the sequence '786'. Simultaneously another offer called Holy Ramzan Pack in the Rajasthan circle, also priced at Rs. 786, will give subscribers full talk time plus international calls to the UAE, Bahrain, Kuwait, Qatar and Saudi Arabia at a specially discounted rate of Rs. 0.14 per second and calls to the USA and Canada at Rs. 0.06 per second.

iPhone 8 concept renders show off iOS 11
Fresh renders of the rumored iPhone 8 have surfaced, now updated with screenshots of iOS 11 to show how they might be scaled to run on the device's speculated edge-to-edge screen. The iPhone 8 renders show Apple's new Control Center, lock screen and Messages apps along with Apple Music adapted to fit the rounded corners and gouged-out upper area which contains the front camera, sensors and earpiece. As previously rumoured, there is no physical home button or space below the screen. It is unclear if or when such a device might launch, and whether it will be called iPhone 8 or something else.

Hot deals on iPhone 7, iPhone 6s Plus and more
Amazon, Flipkart and other major websites have held major sale events over the past month, but even without them, great deals continue to be available. You can buy the iPhone 7 32GB at just Rs. 40,500 at Paytm (after cashback), or pick up an iPhone 6s Plus 32GB for Rs. 40,999 at Flipkart. There are also deals on HP and Lenovo laptops, plus some Bluetooth headphones, and smartwatches.

Moto and HTC smartphones' India launch tipped
Hot on the heels of the Moto Z2 Play launch, the company seems to be gearing up to unveil more models, including the Moto Z2 Force, Moto G5S Plus and Moto X4 in India. A Twitter tipster says that the three will be priced at Rs. 38,999, Rs. 17,999 and Rs. 20,999 respectively. While the first two have been leaked before, this is the first mention of a model named Moto X4. All three are expected to feature dual rear cameras.

Samsung Galaxy Note 8 rumours
Samsung is also gearing up for the global launch of the Galaxy Note 8. The latest leaks and rumours point to an as-yet-unannounced octa-core Qualcomm Snapdragon 836 SoC running at 2.5GHz, a 6.3-inch screen, 6GB of RAM and up to 256GB of storage. It is also rumoured that this model will not feature a fingerprint sensor embedded into the display, due to technical concerns. Samsung is most likely playing it extremely safe after the disastrous Galaxy Note 7 launch.

Oppo launches R11 Plus in China
Oppo has announced its new R11 Plus in China, shortly after launching the R11. This new model has a 6-inch full-HD AMOLED screen, 4000mAh battery, Snapdragon 660 SoC, and 6GB of RAM. There's a 20-megapixel front camera as well as one 20-megapixel and another 16-megapixel camera at the back. It has an all-metal body and runs ColorOS 3.1 based on Android 7.1.1.

India's Internet population to double by 2021
India is set to double its Internet user base by 2021, according to Cisco. From the current level of 373 million users, or 28 percent of the population, there will supposedly be 829 million within the next four years. The prediction is part of Cisco's Visual Networking Index Complete Forecast, and factors in the growth of mobile networks and connections. Cisco says overall IP traffic will grow 4X, and there will be 2.1 billion networked devices, including smart IoT products, up from 1.4 billion last year. Video is said to grow to account for 76 percent of all Internet traffic, up from 57 percent.

Windows 10 Fall Creators' Update preview released
A new Windows Insider preview build of the Fall Creators' Update released by Microsoft shows off a new style for notifications in the Action Center and an overhauled handwriting panel. Users can pin favourite websites to the taskbar, and use a wider range of emoji characters. The features will not show up for users until the update is released later this year, but beta testers can download the preview if they wish to. With the introduction of Microsoft's new Fluent Design concepts, the Fall Creators' Update will refine the look of Windows 10 as well as introduce new features for the Microsoft Edge browser, Cortana AI assistant, hardware stylii, content sharing, network connections, gaming, and ease of access.

Amazon drops unlimited Amazon Drive storage plan
Amazon has done away with its top-end unlimited storage tier for Amazon Drive, which used to cost $60 per year. Storage is now capped at 1TB for the same amount, though you can go up to 30TB if you pay an additional $60 per TB. Current members won't be affected until their subscriptions are due to expire, after which they will have to opt in to a new pricing plan. Amazon Prime subscribers still get unlimited photo storage.

iOS 11 Gets New Accessibility Controls, Support New Photo and Video Formats to Save Storage
E3 2017: Microsoft Wants to Go Big on Scorpio, but Sony, Nintendo May Steal the Show