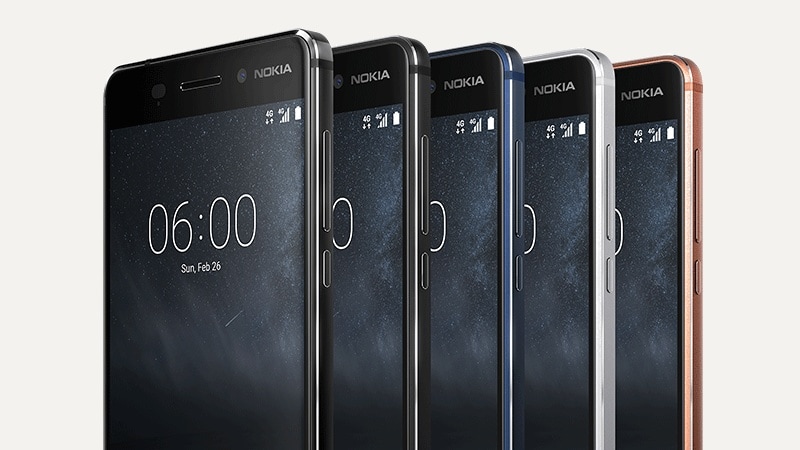 After making a big splash at MWC 2017, HMD Global has launched the trio of Nokia Android smartphone in India, as promised. The Nokia 3, Nokia 5 and Nokia 6 have been launched in India starting at Rs. 9,499 and will run on stock Android Nougat with 4G VoLTE support. The Nokia Android smartphones will also have varying launch offers like cash back for Amazon Prime members, as well as discounts on Kindle eBooks and Makemytrip.com.

Starting with the Nokia 6, which is priced in India at Rs. 14,999 and will be exclusive to Amazon India. Specifications of the Nokia 6 include a Snapdragon 430 SoC, 3GB of RAM, 5.5-inch full-HD display, 3000mAh battery, a 16-megapixel rear camera and a 8-megapixel front camera. The smartphone will go up for registrations on Amazon from July 14.

The Nokia 5 is priced at Rs. 12,899 and will also be available via offline retailers only, with pre-bookings starting on July 7. Pre-bookings will be carried out via select mobile retail channels across all major cities in India. The phone features a 5.2-inch HD display, Android 7.1.1 Nougat, a Snapdragon 430 processor and 2GB of RAM. It will also have a fingerprint sensor, 16GB inbuilt storage (expandable up to 128GB), a 13-megapixel rear sensor and a 8-megapixel front sensor.

The Nokia 3 is currently the company's most affordable smartphone at just Rs. 9,499 and will be exclusively available via offline retail channels from June 16. The handset has a 5-inch HD display, Android 7.0 Nougat, 1.3GHz quad-core MediaTek 6737 SoC and features 16GB of inbuilt storage, which is expandable up to 128GB via microSD card support. You also get a 8-megapixel camera on the front and back of the phone and runs on a 2650mAh battery.

Lenovo launches the Moto E4, Moto E4 Plus with Android 7.1
Following a series of recent leaks, Lenovo has made the Moto E4 and E4 Plus official in the US and some other countries. The two budget smartphones feature the latest Android software, a fingerprint sensor, and front facing flash. The Moto E4 is priced at $129.99 (roughly Rs. 8,300) while the E4 Plus is priced at $179.99 (roughly Rs. 12,240). Both Moto E4 and Moto E4 Plus run on a Snapdragon 400 series SoC although Lenovo had earlier told Gadgets 360 that they will be powered by the MediaTek MTK6737M chipset outside of North America.

Apple focusing its efforts on a autonomous car system
Apple has been rumoured to be working on a self-driving car countless times but we've never gotten any concrete evidence if there was any truth to these rumours - until now. Apple's CEO, Tim Cook, has for the first time said that the company is focusing on developing an autonomous car system. A Bloomberg report states that Apple had initially been seeking to build its own car but is now focusing on developing the underlying technology itself.

Xbox One X doesn't support virtual reality
At a time when everyone is jumping onboard the VR bandwagon, Microsoft deems it best that it's latest gaming console, the Xbox One X, sits this one out. According to a report, the company thinks its best if VR stays with Windows PCs as the "opportunity" and "customer experience" is better. With Sony's Playstation VR supporting all it's PS4 consoles, it's a bit of an odd choice to not support it on its flagship console, at the very least.

Thai police bust 'click farm' working with 500 smartphones
Click farms are one of the many scams that one can approach in order to artificially boost the number of likes or shares for you web page or social posts. Thai police have arrested thee Chinese men for running such a farm and confiscated 500 smartphone and nearly 400,000 Thai SIM cards that were allegedly used in the operation.

HTC U11 set to launch on June 16 in India
The U11 is HTC's flagship smartphone which was recently announced globally, and now, the company is all set to launch it in India. HTC has sent out official invites for the event which will take place on June 16. The HTC U11 will be the second smartphone in India to ship with the Snapdragon 835 SoC, after the Sony Xperia XZ Premium. The unique feature of this phone is the 'squeezable' sides, which lets you perform tasks, depending on the pressure you apply.

New announcements from Sony at E3 2017
Sony may not have had a flashy new gaming console to show off at E3 2017 but it more than made up for it with its upcoming titles. Sony showed off more details about the new God of War game, which will focus more on the father-son relationship between Kratos and Atreus. Of course, expect the same gory, hack-and-slash action to return too in early 2018. Spider Man is another upcoming exclusive which will have Wilson Fisk, as one of the villains. Uncharted: The Lost Legacy will be released on August 22, 2017 as a standalone chapter and will be set in India.

Destiny 2 is arriving early this year as the launch date is now moved up to September 6. Call of Duty is back again this year with a new chapter called World War II. The game will launch on all platforms on November 3. Sony also announced Skyrim will be coming for the Playstation VR; a new Marvel vs Capcom: Infinite and teased an upcoming zombie apocalypse title called Days Gone.

Along with the new titles, Sony also announced PlayLink, which lets you play games on you PS4 via a smartphone. It's targeted at engaging your family or friends to play together and games include crime thrillers to quick-fire quizzes.

Samsung Galaxy S8 Active specifications leaked via Geekbench
Samsung usually makes it a point to launch an active version of its flagship every year, and as tradition would have it, an S8 Active seems to be in the offing. A Geekbench leak reveals some of the specifications of the phone, which is expected to sport the Snapdragon 835 SoC, 4GB of RAM and a HDR display.