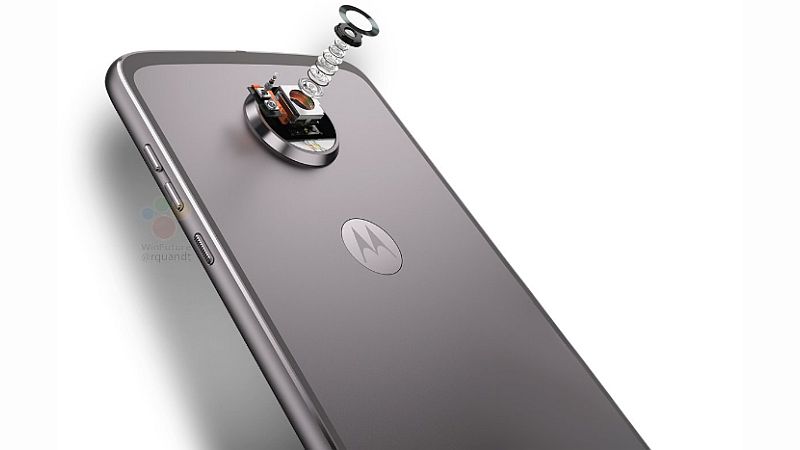 Moto Z2 Play has been launched in India at Rs. 27,999, a week after it was unveiled globally. The smartphone is the successor to Moto Z Play, which was the first of Lenovo's smartphones to heavily promote accessories called Moto Mods. The smartphone will go on sale via Flipkart and offline stores on June 15, and will be up for pre-orders till June 14. The company had announced new Moto Mods earlier but they won't be immediately available in India. If you use Reliance Jio, you get an additional 100GB 4G data if you buy the Moto Z2 Play.

Moto Z2 Play runs on Android 7.1.1 Nougat and has a 5.5-inch full-HD (1080x1920 pixels) Super AMOLED display with Corning Gorilla Glass 3 protection and a pixel density of 401ppi. The smartphone is powered by a 2.2GHz Snapdragon 626 octa-core processor with 4GB RAM. The 64GB of inbuilt storage on board the Moto Z2 Play can be expanded via microSD card (up to 2TB). It has a 3000mAh battery with fast-charging, 12-megapixel rear camera, and a 5-megapixel selfie camera.

Here are other things that made news in the world of technology today.

OnePlus 5 price, specs tipped ahead of June 20 launch
OnePlus 5 appears to be the smartphone everyone is waiting for at the moment. The company has always claimed to make flagship smartphones available at a low price and it has found its audience in those seeking value for money. This time, however, the price may actually be a lot closer to flagship smartphones than before. The OnePlus 5 could indeed end up costing almost as much as the iPhone 7 or the Samsung Galaxy S8, but will people buy it at that price? We'll find out soon enough.

On news closer home, Amazon India has announced OnePlus 5 will be up for purchase on June 22, the day it arrives in the country. The source code of the Amazon India Web page also revealed the smartphone will have 8GB of RAM.

iPhone 6, iPhone 7 available on discount in India
Flipkart is selling the iPhone 6 with 16GB storage at its lowest price yet in India; this is part of the company's Father's Day promotion, and the offer lasts till June 10. Interestingly, the iPhone SE is available at the same price via Flipkart. Amazon India is never too far from the competition either, as the e-commerce website has put the iPhone 7 on sale. Thanks to this competition, you can now get pretty much any iPhone you want at a good price.

iPhone 8, iPhone 7s rumours roll on
We're reaching that phase where every day brings a few new iPhone rumours. The latest ones show critical design details and reveal information about the smartphone's production. The new report may be credible because it confirms some things we've already seen in previous leaks. It also claims that there will be no delays in the launch of the iPhone 8, in spite of other rumours claiming the phone's alleged new design would lead to a short launch delay.

WhatsApp could get the un-send feature soon
Ever sent a message to the wrong group? Or maybe typed something you immediately regretted? If yes, then WhatsApp's upcoming message recall feature is sure to please you. It lets you delete messages on both your and recipient's phones within 5 minutes, making this a must-have for many people who wish they could take back certain things they sent. Reportedly, the WhatsApp feature will be activated remotely on phones with 2.17.30 version of the app or higher.

Oppo F3 Plus price cut in India
Oppo F3 Plus has reportedly received a significant price cut in India. The smartphone, which was launched earlier this year at Rs. 30,990, is now available at a discount of Rs. 3,000. If you were waiting for this, then now may be a good time to pick up this smartphone. Oppo F3 Plus sports a 6-inch full-HD screen, 1.95GHz octa-core processor, 4GB RAM, 64GB internal storage, 4000mAh battery, and dual rear cameras.

'Siri nowhere near as good as Alexa or Google Assistant'
A former Apple employee has reportedly claimed that Apple's Siri is not anywhere near as good as Amazon Alexa or Google Assistant. All three are voice-based virtual assistants but Siri still lags behind, the employee claims. This may not come as a surprise to anyone who has used all three virtual assistants, but with Apple's HomePod being launched at WWDC 2017, people might want to factor in Siri into their buying decisions.

Xbox Scorpio coming at E3 2017?
Microsoft's next big console is the Xbox Scorpio and it may be launched during E3 2017, which is one of the biggest gaming events of the year. We'd still avoid believing every rumour around the Xbox Scorpio but at this point it is safe to expect a proper reveal at E3 2017.