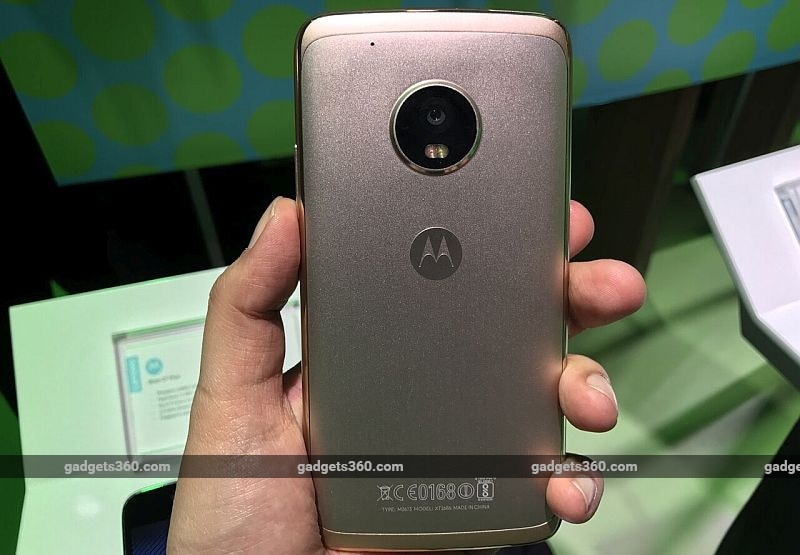 Just a day after the Moto G5 and Moto G5 Plus global launch, Lenovo has sent out invites announcing the India launch date of the latter. The invite says that the Moto G5 Plus will be launched in India on March 15, but there was no mention of the Moto G5 for the domestic market. At the MWC 2017 event, Moto G5 Plus price for the 2GB RAM + 32GB variant was announced as $229 (roughly Rs. 15,300), whereas the 3GB RAM + 32GB model has been priced at $279 (approximately Rs. 19,700). Price of the 4GB RAM + 64GB storage model has not been announced so far.

The new Moto G5 Plus has a 5.2-inch full-HD screen, 2GHz octa-core Snapdragon 625 chipset, microSD card expansion up to 128GB, 12-megapixel rear camera with dual-LED flash, 5-megapixel front camera, 3000mAh battery with TurboPower fast charging technology. On the software side, the Moto G5 Plus runs the Android 7.0 Nougat operating system and supports Google Assistant AI-based digital assistant, along with features such as Moto Display, Moto Actions, Twist, and a new One Button Nav that allows users to navigate the interface using the fingerprint sensor.

But this is not the only launch to get excited about, as MWC 2017 saw a number of smartphones and other devices being announced. Let’s take a look at those, and more, in 360 Daily. For other MWC stories including all the announcements from Nokia, LG, Moto, Samsung, and others, check out our MWC hub.

Airtel announces ‘war on roaming’ with free incoming calls in all circles
Airtel has repealed roaming charges for users for incoming calls outside their home circle, terming this a “war on roaming.” India’s biggest telecom operator also said that it will stop premium charges on outgoing calls while roaming. For international roaming starting April 1 2017, the company will offer customers protection from bill shocks. Call charges have been reduced by up to 90 percent to as low as Rs. 3 per minute on international roaming, while data charges by up to 99 percent to Rs. 3 per MB in popular roaming destinations, Airtel said on Monday.

Lenovo Tab 4 series Android tablets launched
While Samsung’s Galaxy Tab S3 and Galaxy Book were the tablets of note at MWC 2017, Lenovo launched its new Tab 4 series models at the event. The four Lenovo tablets, named Tab 4 8, Tab 4 10, Tab 4 8 Plus, and Tab 4 10 Plus, run Android 7.0 Nougat and offer battery life of up to 12 hours, the company said. The four models are being targeted at both kids and adults, and come with multi-user mode.

The Lenovo Tab 4 8 and Tab 4 10 sport 8-inch and 10.1-inch displays, respectively; both feature HD screens, Snapdragon 425 SoC, 2GB of RAM, and come in 16GB and 32GB storage options. The respective Plus models feature the same screen size but come with Snapdragon 625 processor and 3GB of RAM.

Samsung Gear VR 2017 edition launched, comes with touch controller
The Samsung Gear VR virtual reality headset received an update at MWC 2017, and it will now come with a VR controller which, Samsung says, makes it easier for the user to interact with VR apps and games. With the controller, users will be able to "point, drag and drop, tilt, shoot, among other actions, while the Trigger allows for enhanced gaming experiences.” The new Gear VR headset has 42mm lenses with 101-degree FOV (Field of View) and "advanced distortion correction technology" to minimise users' motion sickness.

Gionee A1, A1 Plus selfie phones with big batteries launched
While for most brands selfie phones and big battery phones are two distinct niches, Gionee has gone ahead and combined the two with the new Android Nougat-based Gionee A1 and Gionee A1 Plus smartphones. Launched at MWC 2017, the new Gionee A1 has a 16-megapixel front camera and 40101mAh battery, while the Gionee A1 Plus comes with a 20-megapixel sensor in front and packs a 4550mAh battery.