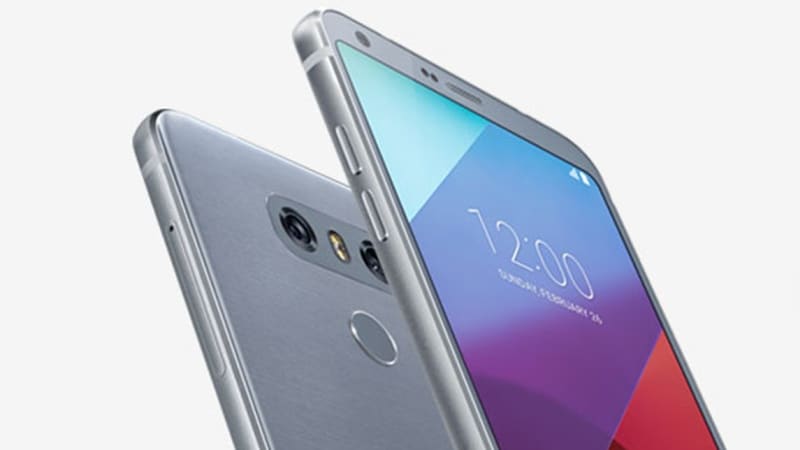 The LG G6 flagship smartphone has been launched in India, bringing a rival to the new Samsung Galaxy S8 within days of the latter's arrival in the country. The LG G6 will be available exclusively via Amazon India for online sales, and can also be purchased from offline stores starting Tuesday, April 25. LG has some launch offers like Rs. 10,000 cashback for HDFC and SBI credit card holders, applicable only on Tuesday on Amazon India, a 50 percent off on the LG Tone Active+ HBS-A100 wireless headset, which is valid till May 31 and the company has also detailed a Reliance Jio offer, where LG G6 users will get additional 10GB on every recharge of Rs. 309, translating to an additional 100GB until March 2018.

A report states that LG Electronics India, also plans to launch a new range of affordable smartphones equipped with features tailored for local requirements around Diwali. With smartphone revenue currently accounting for a minuscule part of the total business, LG Electronics India Managing Director Ki Wan Kim said the company will try to understand consumer feedback with the new products without setting any targets.

The biggest deal is a flat Rs. 20,000 discount on the iPhone 7 256GB variant. There's a further exchange discount applicable of up to Rs. 19,000 depending on the phone you exchange it with and extra 5 percent off on Axis Bank Buzz Credit Cards as well. The new Apple MacBook Pro range has the exchange offer of up to Rs. 15,000 while the MacBook Air is priced at Rs. 54,990 with the Axis Bank Buzz Credit Card offer. The iPhone 6 16GB gets Rs. 26,010 off, and can be bought for as less as Rs. 25,990 while there are varying discounts are also offered on the iPhone 6s, iPhone SE, and iPhone 5S.

Nokia 3310 (2017) said to release on April 28
The Nokia 3310 (2017) has certainly been the Nokia phone that has grabbed the most attention and headlines than others since the company announced its comeback, and now it seems like it will be made available later this month. The device's pre-order listings for Germany and Austria have tipped a release date of April 28. However, the Nokia 3310 may be a little more expensive than the price announced at the time of global unveiling, if listings spotted across Europe are any indication. HMD Global has confirmed that the feature phone will only support 2G, despite some recent reports to the contrary.

iPhone 8 leaked images tip conflicting designs
Apple is set to launch an anniversary edition iPhone alongside the iterative updates this September and now, few live images of a purported iPhone 8 dummy model have been leaked by tipster Benjamin Geskin shed light on its design. These images indicate that it will sport a glass back with 2.5D curved glass and a vertical dual camera setup. The front is also all glass, with no bezel visible. There is also no fingerprint scanner at the back, and no Home Button in the front, indicating that the fingerprint scanner could indeed be embedded underneath the display.

The tipster also states that the iPhone 8 will sport dual front cameras as well - a first for the series if true - and will be 7.1mm thin. Geskin also notes that the camera bump is still visible, and is not flushed as expected.

Vodafone's new international roaming pack offers unlimited calls and data in three countries
Vodafone India on Monday unveiled a new international roaming pack, called Vodafone i-Roam FREE. It offers "home-like tariffs while roaming in 47 countries," and offers free unlimited calls and high-speed data in the US, UAE, and Singapore - in other countries, pack users will get incoming calls free, while data will be chargeable at Re. 1 per MB and outgoing calls at Re. 1 per minute.

Samsung Galaxy S8's Bixby button can now be remapped
Soon after the launch of Samsung Galaxy S8 and Galaxy S8+ smartphones, it was found that the dedicated Bixby button on the devices could be reconfigured and Samsung wasn't helping when it blocked a remapping workaround by pushing out an update. Now, the Bixby Button Remapper app on Android, as the name suggests, allows users to remap the dedicated physical Bixby button to launch most of the services on the device. Notably, the app is able to remap the button to launch the camera app, flashlight, power menu, and even Google Now among others, but doesn't seem to be capable of launching Google Assistant as of now.

Some early adopters of the Galaxy S8 and Galaxy S8+ also complained about a red-tint issue on the display. Now, Samsung has said that a software update would fix the problem by allowing users to readjust colours over a wider range than at present.

Apple CEO threatened to drop Uber's app over iPhone tagging
If a new in-depth report is to be believed, Uber CEO Travis Kalanick was once warned by Apple CEO Tim Cook for not following the App Store guidelines, even threatening that the Uber app would be kicked out of the App Store. A New York Times report says that Kalanick met Cook early in 2015 at Apple's headquarters, and was pulled up for the app's ability to persistently identify iPhone devices in a process called "fingerprinting", which violated Apple's privacy guidelines. Contradicting the New York Times report, Uber has told Engadget that it "absolutely" does not track individual users after they've deleted the app.

Gionee M6S Plus with 6GB of RAM and 6020mAh battery launched
Gionee on Monday launched its new M6S Plus smartphone in China, which comes with some really interesting specifications to say the least like a 6020mAh battery and 6GB of RAM. The phone will be made available in two storage variants with - 64GB and 256GB of inbuilt storage. The pricing for the phone starts from CNY 3,499 (roughly Rs. 32,800) and goes up to CNY 4,299 (roughly Rs. 40,200) for the 256GB storage variant. It has gone up for bookings, with the first sale on May 2.

Moto Z2 Play render images leak
Many Moto smartphones are in the works for release this year, according to recent leaks, and now the Moto Z2 Play has joined the bandwagon. The device has been leaked by TechnoBuffalo this time, and it shows the back, front and side of the phone. All in all, the Moto Z2 Play looks a lot like its powerhouse predecessor Moto Z Play, except for probably the Home Button design. The phone also has the connected pins at the back bringing support for Moto Mods.

uTorrent will soon be available in your Web browser, says BitTorrent founder
While online piracy has faced some setbacks in the past few years, it seems like Web pirates now have something new to look forward to. BitTorrent creator Bram Cohen said that the "new revision" of the uTorrent client will run in user's default browser and will provide a "nicer experience" than the current version, as per a report by TorrentFreak. However, it seems that the company realises that pushing out such a major change to the torrent client can easily back-fire if users do not react to it positively. This is why the transition to browser will be pushed out widely only after receiving feedback from users.

Microsoft tipped to take on Chromebooks at May 2 event
Microsoft is set to host a special software and hardware event on May 2 and a fresh leak seems to give clarity on what may be launched at the event. The Redmond-based giant is looking to unveil its Windows 10 Cloud software - a more metered down OS targeted at students - and is also expected to launch a device running on the previously rumoured Windows 10 Cloud platform, in a bid to beat Chromebooks at its own game.

Windows Central has leaked a screenshot of minimum specifications required for a device running on Windows 10 Cloud, which includes a quad-core Celeron (or better) processor, 4GB of RAM, and 32GB or 64GB of storage. Optional pen or touch support is also included.