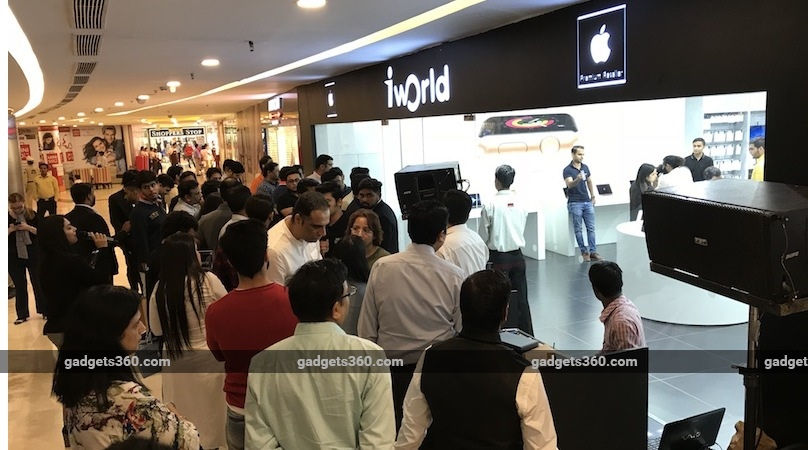 iPhone X sales in India started today at 6pm local time, with long queues outside Apple resellers in Delhi-NCR, Mumbai and other major cities. People were lining up outside the stores hours before the sales started in order to get their hands on the new Apple phone, though supply is expected to fall short of demand. iPhone X pre-orders started last Friday, and people who pre-booked the handset should receive it today, with a South Delhi retailer saying that others may forget about getting it for at least the next 3-4 days. For those unaware, this is the first wave of iPhone X availability globally; the iPhone X price in India for the 64GB and 256GB variants is Rs. 89,000 and Rs. 1,02,000, respectively.

A teardown of the new Apple flagship by iFixit has revealed that the smartphone has a two-cell battery and an L-shaped battery pack; the combined capacity is 2716mAh. Another notable thing is that the logic board of the handset is 70 percent smaller than that of the iPhone 8 Plus. The handset also packs 3GB SK Hynix LPDDR4x RAM, wireless charging coil, Qualcomm modem. The handset got six out of 10 in repairability from iFixit.

WhatsApp suffers global service outage
Popular messaging app WhatsApp suffered an outage affecting users across the world, leading to #whatsappdown becoming a trending hashtag in several countries. According to Down Detector, India (especially the western regions), South East Asia, and Europe were severely affected, while there were a few reports of the outage from the Americas, Africa, Russia, and Australia. The WhatsApp outage started at 1pm IST, and service was back up by 3pm IST, though users got an error message despite being able to send/ receive texts.

Paytm launches inbox, a messaging platform
Paytm has launched a messaging platform called Inbox, complete with the option to recall messages, a day after WhatsApp rolled out the option to delete sent messages to all its users. Like WhatsApp and other messaging apps, Paytm Inbox lets users share texts, photos, videos, and live location. For now, the feature is available only on the Android app, with iOS support coming soon. Users will also be able to send and receive money with contacts in the conversations too. The Paytm Inbox chats are secured with end-to-end encryption.

OnePlus 5 gets OxygenOS 4.5.14 update
OnePlus 5 has started receiving the OxygenOS 4.5.14 update that brings a patch to fix the WPA2 KRACK vulnerability that puts Wi-Fi-enabled devices at risk of data being accessed by unauthorised parties. The update, which is being rolled out gradually, also introduces optimisations in battery usage and GPS accuracy, as well as bug fixes. For India-based users of OnePlus 5, the update also brings support for Airtel VoLTE network.

Book up to 12 tickets from IRCTC on linking Aadhaar
Aadhaar-verified IRCTC users will now be able to book up to 12 tickets in a month, up from a maximum of six till recently. This is an effort by the Indian Railways to get more passengers to get their Aadhaar KYC process done, which can be done under the My Profile tab when a user is logged in. When a user who is yet to link their Aadhaar tries to book tickets of more than six passengers will get a prompt to link their own and one of the passengers’ UIDAI number via the KYC process.

Twitter says Trump’s account deactivated by departing employee
Twitter has said that a disgruntled employee, who was leaving the company on Thursday, deactivated the account of US President Donald Trump. The @realdonaldtrump Twitter account “was inadvertently deactivated due to human error by a Twitter employee,” the company said. Trump's account was down for a total of 11 minutes, and has led the company to conduct a full internal review and to take steps to ensure something like this doesn’t happen again.

Some Pixel 2 units reportedly shipped without an OS
Google’s Pixel 2 troubles don’t seem to be ending anytime soon. The latest is that multiple Reddit users posting on the front page of the Internet that the Pixel 2 XL units they received apparently came without an operating system installed. These users were greeted with the message: "Can't find valid operating system. The device will not start." Google is reportedly replacing the Pixel 2 XL units that were shipped without Android.

Asus Pegasus 4S with 18:9 display, 4030mAh battery launched
Asus has also joined the league of brands offering smartphones featuring displays with 18:9 aspect ratio with the launch of its Pegasus 4S. The display panel measures 5.7-inch, has HD+ (720x1440px) resolution and 2.5D curved glass design. Another highlight of the Asus Pegasus 4S is the 4030mAh battery; it will come in two variants, one with 3GB RAM and 32GB storage, and another with 4GB RAM and 64GB storage. Other key features include Android 7.0 Nougat OS, 8-megapixel front camera, dual 16-megapixel + 8-megapixel rear cameras, 4G VoLTE support, and fingerprint sensor on the back. The smartphone’s price and availability details have not been revealed so far.

Xiaomi makes big gains as Q3 smartphone shipments cross 373 million
The Xiaomi juggernaut doesn’t seem to be slowing down anytime soon, as an IDC research note placed the company at fifth position in the global smartphone market. The Chinese brand made the strongest gains in the quarter, and doubled its shipments to 27.6 million. Samsung, of course, was at the top spot with 83.3 million units shipped, with Apple second at 46.7 million. The third and fourth positions were taken by Huawei and Oppo, with 39.1 million and 30.7 million smartphones shipped, respectively. Though smartphone shipments rose 2.7 percent in the July-September period, IDC added that outside of top 5, other smartphone brands continue to struggle.

iPhone X Has a 2-Cell Battery, Smaller Logic Board Than iPhone 8 Plus: iFixit Teardown