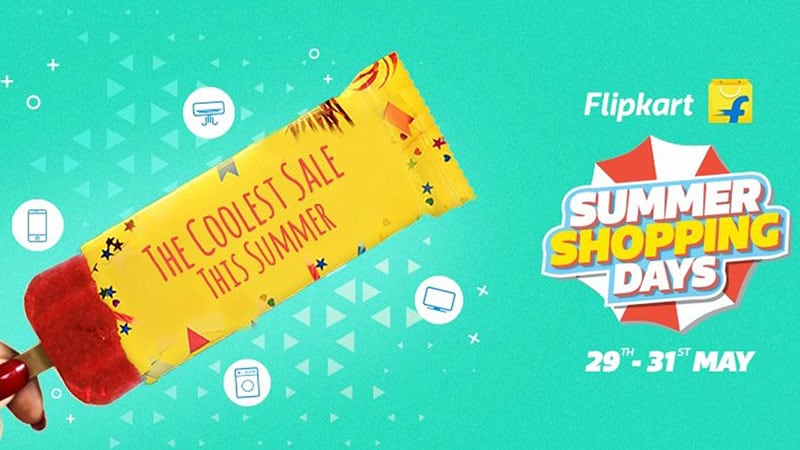 Flipkart has started a new three-day ‘Summer Shopping Days’ sale on Monday, which comes less than two weeks after its 10-year-anniversary sale earlier this month. The highlight products in the Flipkart sale are the iPhone 7 and 7 Plus (over Rs. 30,000 discounts), alongside smartphones from the likes of Samsung, Lenovo, and Vivo; electronics accessories up to 40-80 percent off, and up to 60 percent off on televisions, ACs, and home appliances. You can also get Google’s streaming stick, the Chromecast 2, for a Rs. 400 discount at Rs. 2,999. There are also offers on a bunch of tablets, laptops, and cameras in the Flipkart sale.

OnePlus starts new referral programme, as more details leak of next flagship
Ahead of the impending summer launch for the next OnePlus flagship – the OnePlus 5 – the Chinese manufacturer has rolled out a new referral programme, which will give you a link that you can share with your friends. If they purchase a OnePlus phone via that link, they will receive a $20 (or the equivalent in local currency, around Rs. 1,300) discount on any accessory, and the referrer will get 100 referral points in return. Unfortunately for now, the page seems to redirect a 404 not found error in India. Hopefully, it’ll be up working soon here too.

In other OnePlus news, new renders of the OnePlus 5 have leaked, which either help to substantiate earlier ones, or increase the confusion. Here’s what we can tell from the new pictures: a vertical dual-camera setup, bezel-less display on the side, and the possibility of a home button carrying a fingerprint scanner.

New malware reportedly affects 36.5 million Android devices
Security researchers have located a new auto-clicking adware, dubbed ‘Judy’, on 41 Google Play apps developed by a Korean company, that could affect between 8.5 million and 36.5 million Android devices, since the apps carry around half those number of downloads. For what it’s worth, Google has already removed the malicious apps from its store after the research group, Check Point, informed the company.

Nokia 9 supposedly gets listed on GeekBench again
After showing up last week as ‘HMD Global TA-1004’ in a GeekBench listing, the upcoming Nokia 9 has seemingly leaked again on GeekBench, this time as a device called ‘Unknown Heart’. The reason people think it’s the same phone is because of the specifications it carries, namely Android 7.1.1 Nougat, the Snapdragon 835 chipset, and an (unnecessary) 8GB of memory.

Given the earlier leak had 4GB RAM, it’s possible the phone might have two variants. Or we’re just grasping in the dark, and nothing is certain. Meanwhile, another Nokia device – codenamed RX-100 – has leaked on a Chinese website called Teiba. It shows a phone with a QWERTY keypad, and a Windows logo in the middle, which correlates with an image from 2012. It’s very likely this is just one for the archive, given Microsoft has almost given up on Windows Phone entirely.

BSNL plans to bring satellite phone services to consumers
BSNL has revealed that it plans to extend satellite phone services for all citizens in the next two years. The advantage of course is that you’ll be able to make calls seemingly from any part of the country, since there’s no need for a cellular tower anymore. That includes airplanes and ships too, as all the communication happens with, well, a satellite.

The disadvantage is that it will prohibitively cost a lot more in the beginning: around Rs. 30-35 in the first phase. Plus, there was no word on how internet services would perform, given we’re now into 4G on cellular networks, with 5G on the horizon. Strangely enough, India’s defence forces don’t tend to rely on satellite phone, the report claims, since they are wary of monitoring by foreign agencies, as the gateways are located outside the country.

Moto G5S Plus and Moto Z2 Play gets fresh leaks
Two of Lenovo’s upcoming phones have leaked in different ways. The Moto G5S Plus, a companion to the Moto G5S, has shown up in press renders, showing the phone in a Midnight Blue colour variant. It also corroborates the all-metal design, a front-facing flash, and antenna bands on the back.

The other phone is the Moto Z2 Play, which is seen in live images, as well pictures of the retail box. From the specification sticker on the phone’s front, it will have support for Moto Mods, a 5.5-inch full-HD display, a 12-megapixel rear camera, a 3,000mAh battery, 64GB internal storage, and 4GB RAM. In case you’re wondering, the retail box has a red colour, visible here.

ARM launches new chipsets focused on AI and machine learning
While Computex 2017 doesn’t officially kick off until Tuesday, ARM has already unveiled a new generation of its CPUs and GPUs in Taiwan. The three in question include the ARM Cortex-A75, the ARM Cortex-A55, and the Mali-G72 GPU. The two ARM chips are carrying the company’s new Dynamiq technology, which allows for “greater flexibility of cores”. For example, chip-makers like Qualcomm can now design pairs of previously mismatched processors, such as seven Cortex-A55 cores and one Cortex-A75 core.

Plus, ARM claims that the new CPUs are designed specifically for artificial intelligence and machine learning, which should find a common ground with Google’s aim with the help of TensorFlow Lite. On the software side, the new CPUs can boos AI and ML performance by a range of 10-15x. The Mali-G72 GPU, meanwhile, is built on a new Biforst architecture, which provides better performance while shrinking in size. It’s got a 1.4x increase in in-device performance from G71, 25 percent higher energy efficiency. You can expect to see the Cortex-A75, Cortex-A55, and Mail-G72 starting in devices early next year.

Samsung Galaxy J5 (2017) and Galaxy J7 (2017) show up in new leak
The 2017 iterations of Samsung’s mid-budget Android smartphones, the Galaxy J5 (2017) and the Galaxy J7 (2017), were briefly listed on the company’s Korean website, as part of the page that lists Kids Mode compatibility. While they were pulled soon after, Russian reviews of the two devices have been uploaded to YouTube, which point to the fact that the phones have been sent out to reviewers, and are currently under embargo.

Google adds a ‘Personal’ tab to search results
Google is adding a new “Personal” tab to its search results, that will show results pulled from Gmail and Google Photos. It’s an upgrade and off-shoot of what Google had started doing earlier, where the “All” search result page would fetch relevant results from Gmail. The new tab gives it its own thing, so you don’t have to worry about public and private information jumbling with each other.

The “Personal” tab doesn’t show up in the listed options, and must be accessed from the “More” tab. It’s slowly rolling out to users, so if you don’t see it just yet, you’ll have to wait a bit.