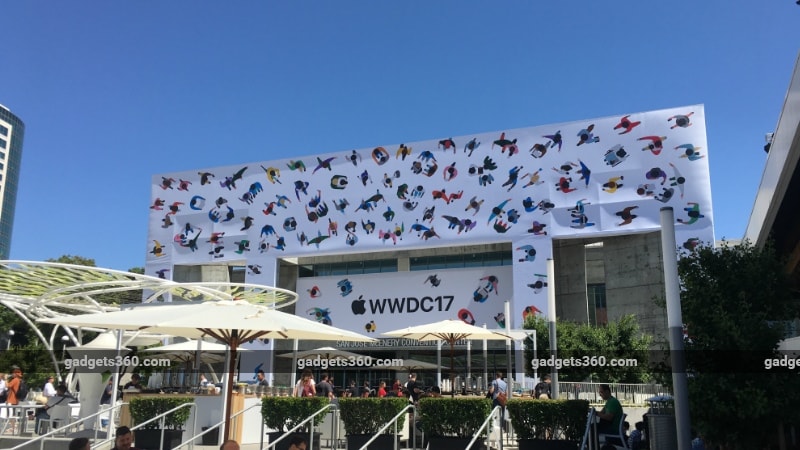 Apple's annual developer conference, WWDC 2017, takes place on Monday at 10AM PDT (10:30PM IST), where it's expected to talk about the next iteration of its software – iOS 11, and macOS 10.13 among others – as well as possibly launch a range of new hardware products, going by rumours and reports. Top of the list is a Siri-enabled speaker, which will compete with Amazon's Echo range and the Google Home, plus new iPad models, and a MacBook spec refresh.

Some of it has also been corroborated by a leak from alleged 'Foxconn insiders' in a Reddit thread, where the user confirmed an "Apple home speaker" was in the works, but was being produced at another manufacturer. They also said that Apple was looking at a 32GB RAM variant of MacBook Pro 15-inch, said the design of the next iPhone – calling it "iPhone X" - was closest to the one with a vertical dual camera setup with glass back, and that there also plans for an AR headset, codenamed Project Mirrorshades.

In news that's much more likely to happen at WWDC 2017, a developer has spotted two new apps on the App Store: Files, and Activity. There are no details on the apps, besides the obvious naming, except their compatibility is limited to iOS 11. That's as much a hint you're going to need. You can catch the livestream for WWDC 2017 here.

Reliance Jio 4G download speed hits all-time high
According to the latest available TRAI data from its MySpeed app, Reliance Jio hit an all-time high in the 4G download speeds during the month of May, offering its customers an average download speed of 19.123Mbps across India. Next on the rankings were Idea (13.709Mbps), Vodafone (13.387Mbps), and Airtel (10.153Mbps). If you care more about upload speeds on 4G, the rankings were different. Idea took the top spot (8.459Mbps), followed by Vodafone (7.333Mbps), Jio (5.275Mbps), and Airtel (4.641Mbps).

ISRO launches GSLV-Mk III rocket with its heaviest communications satellite aboard
At 5:28pm on Monday, ISRO successfully launched the GSLV-Mk III rocket, which is carrying a three-tonne communications satellite called GSAT-19. The rocket blasted off from the Satish Dhawan Space Centre in Sriharikota, Andhra Pradesh, which has historically served as one of two important sites for India's space missions. The rocket, weighing 640 tonnes and standing 43.43 metres tall, travelled 179km in just under 16 minutes, placing the GSAT-19 into orbit, where it will have a lifespan of a decade.

Moto Z2 Play India launch on Thursday
Moto Z2 Play, which was unveiled in the US last week at $499 (roughly Rs. 32,200), will be launched in the Indian market on Thursday, June 8. Pre-orders for the smartphone will start the same day, Lenovo has confirmed. The Motro Z2 Play India launch event will start at 12pm on Thursday and will be live-streamed. The company has announced pre-order offers for the smartphone too, such as the option to pay Rs. 2,000 for the advance booking and the rest over 10 months at zero percent interest; those who pre-order the smartphone will get the Moto Armor pack, which contains protective accessories for the device. More such offers will be announced as the launch draws nearer.

New OnePlus 5 leak shows horizontal orientation for dual camera
With OnePlus 5 set to launch this month, a new leak on Weibo has once again upended the debate on the orientation of the dual rear camera. While multiple previous leaks had suggested a vertical setup, the new teaser image points to a horizontal one, similar to that on the iPhone 7 Plus. A second set of leaks suggest that one of the cameras would sport a monochrome sensor, taking the approach preferred by Huawei for its dual-camera phones.

Meanwhile, OnePlus is offering a free mobile cover worth up to Rs. 1,499 if you buy the OnePlus 3T from its online store. If you missed the earlier news, you should know that the seven-month-old phone is on its way out, so keep that in mind before you jump on this offer.

Amazon might come out with low-budget 'Ice' phones
Amazon might have failed with its Fire-branded smartphone launch in 2015, but it hasn't fully given up, it seems. According to sources familiar with the matter, Amazon is looking to enter emerging markets such as India with phones that would run Android with all Google apps present, as opposed to its own Fire OS. The phones are being referred to as 'Ice' internally, which is as far a pivot you can do from something previously called 'Fire'.

One of the planned Amazon Ice phones has a screen size between 5.2- and 5.5-inch, and will be powered by the Snapdragon 435. It will include a 13-megapixel rear camera, 2GB RAM, 16GB internal storage, rear-mounted fingerprint scanner. It's expected to cost around Rs. 6,000.

Moto E4 Plus might cost about Rs. 13,300
Lenovo's upcoming Moto E4 Plus has leaked on Twitter, with a press render and price, adding to all the information we already had. The image shows a home button in the front with a fingerprint scanner, and thinner bezels than the E4. The SIM-free unlocked variant will start from GBP 159.95 (roughly Rs. 13,300), though that pricing will apply differently worldwide, given import costs and all that.

Huawei launches 8-inch version of MediaPad M3 Lite
Huawei has launched a new tablet for the Chinese market, called the MediaPad M3 Lite 8.0. Since Samsung owns the Harmon audio brand, the tablet comes with Harmon Kardon-tuned speakers, with options to buy Wi-Fi only, or Wi-Fi + LTE. Beyond that, the MediaPad M3 Lite has an 8-inch 16:10 full-HD display powered by a 1.4GHz octa-core Qualcomm Snapdragon 435, 8-megapixel rear and front cameras, and runs on Android 7.0 Nougat.

It'll be made available in two memory and storage variants: 3GB and 32GB, and 4GB and 64GB, respectively. Both have a 4,800mAh battery inside. There doesn't seem to be any information on release date, or pricing as of now.

Samsung's 2017 model of Galaxy J5 shows up for German pre-orders
Ahead of its possible impending launch, Samsung's mid-budget Galaxy J5 (2017) has shown up on German retail websites, listed for pre-orders with its specifications now official. The dual-SIM phone will have a 5.2-inch HD Super AMOLED display, running an octa-core Exynos 7870 processor, contain 2GB RAM and 16GB internal storage, the latter of which is expanable up to 256GB with microSD card.