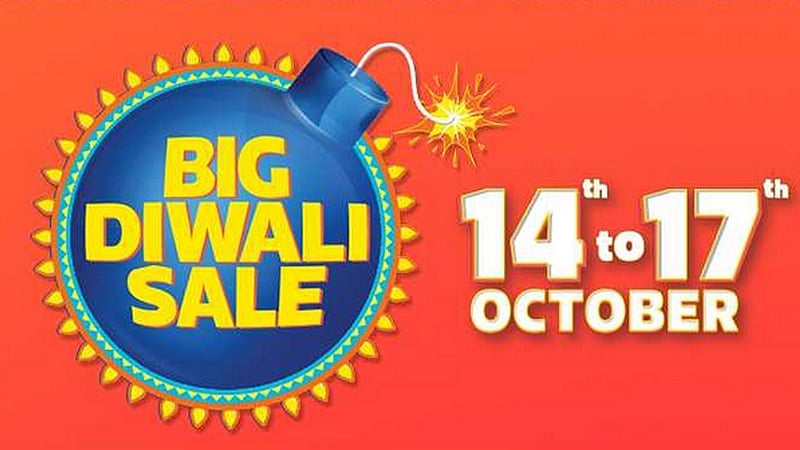 Amazon's Great Indian Festival Sale will run from October 14 to 17, and the company is teasing discounts of up to 40 percent on Apple, Samsung, OnePlus, Xiaomi and Moto phones, among other brands. There will be offers on TVs, laptops, cameras, storage devices, and accessories. Amazon will also be discounting its exclusive brands, Kindle products, and AmazonBasics accessories.

Flipkart and Snapdeal have joined Amazon in teasing some of the offers that will be available during their respective Diwali sales that kick off this weekend. Flipkart's Big Diwali Sale will run from October 14 to 17, and the company will be offering buyback guarantees, instant discounts for HDFC Bank cardholders, and no-cost EMIs in addition to price reductions. Popular phones that will be discounted include the Xiaomi Redmi Note 4, Moto C Plus, Lenovo K8 Plus, Samsung Galaxy On Max, and Moto E4 Plus. Last year's Samsung Galaxy S7, Google Pixel and Pixel XL are heavily discounted. There are also hints of special offers on recently launched phones such as the Xiaomi Mi Mix 2 and Honor 9i.

Meanwhile, Snapdeal has already begun its Unbox Diwali sale which runs from October 13-16. There are offers on multiple categories of products. There are discounts and cash back offers for Citibank, Standard Chartered and HSBC cardholders, plus Dhamaka Deals throughout the sale. Smartphones on offer include the Vivo V5 Plus, Gionee A1, and Moto G5s. Other products on sale include storage devices, headphones, laptops, and Bluetooth speakers.

Jio subscriber base grows to 136.8 million
Reliance Industries Ltd has announced in its latest quarterly report that Jio's subscriber base stands at 136.8 million as of Sepember 30. This represents a growth of 15.3 million subscribers compared to the previous quarter. However, Jio Infocomm posted a loss of Rs. 271 crore. The company still believes that this is strong performance, and that the uptake reflects the needs of Indian society. The company also sold an estimated 27 million LTE-capable smartphones in India, and claims to have an 85 percent market share when it comes to LTE smartphones.

Nokia 8 with 6GB RAM, 128GB storage goes on sale; Nokia 6 gets software update
HMD Global, the company behind the resurgent Nokia brand, is all set to begin selling its flagship Nokia 8 model in India on Saturday. However, a new variant with more RAM and storage has also just gone on sale in the company's home country, Finland. Previously, the device was available only with 4GB of RAM and 64GB of storage. The new variant boasts of 6GB and 128GB respectively. It isn't known whether this variant will also be launched here.

In other Nokia-related news, an Android 7.1.2 update is reportedly rolling out to Nokia 6 users worldwide. The OTA update improves system stability and security. The company seems to be fulfilling its promise to deliver regular Android updates, and the Nokia 6 is still expected to be updated to Android 8.0 Oreo.

BSNL 'Laxmi Promotional Offer' announced
BSNL has announced another festive offer for cellular subscribers. The new Laxmi Promotional Offer gives prepaid customers 50 percent extra talktime on refills of Rs. 290, 390 and 590. The offer is valid only on these three denominations, and only between Ocrober 16 and 21. This follows a similar 50 percent cashback offer called Dusshera Vijay last month.

Touch ID might not be supported on any of next year's iPhones
Apple's decision to drop the Touch ID sensor from its slick new iPhone X has drawn sharp criticism from all corners, but it seems that the company could go ahead and drop it from all the new models it introduces next year. According to the world's most prolific Apple leaker Ming-Chi Kuo, Apple isn't even trying to embed fingerprint sensors into display glass anymore, because the new TrueDepth camera and Face ID recognition system can help set future iPhones apart from their Android competition. This could also mean that all of next year's models will have all-glass front panels like the upcoming iPhone X.

Razer's upcoming smartphone could be a gaming powerhouse
Gaming harware manufacturer Razer might be planning to disrupt the smartphone market. A Razer-branded phone has reportedly appeared in benchmark databases, and according to the logs, it will have a 5.7-inch screen, Qualcomm Snapdragon 835 SoC, 8GB of RAM, 64GB of storage and a single 12-megapixel rear camera. The focus on high-end specs aligns well with gaming. The company had previously confirmed plans to jump into the smartphone market before the end of 2017.

Oppo F3 Lite launched in Vietnam, F5 coming to India soon
Oppo has launched the Oppo F3 Lite, in Vietnam. It's a rebranded version of the Oppo A57 which was launched in India in January this year. Like the rest of the "selfie expert" F-series, the focus is a high-quality front camera. The F3 Lite has a 5.2-inch screen, Snapdragon 435 SoC, 3GB of RAM, and 32GB of storage.

Oppo has also teased the upcoming launch of a completely new model the F5, on November 2. This phone could launch first in India along with Indonesia, Thailand, Vietnam, Myanmar, Malaysia and the Philippines. It is expected to have an 18:9 full-HD+ screen and AI-powered camera enhancement. More details are expected in the runup to the launch.

Honor 6C Pro launched in Russia
Huawei's Honor subsidiary has launched the Honor 6C Pro in Russia. Thsis new phone is larger than the Honor 4C, but looks similar to it. This new model runs Android 7.0 and features a 5.2-inch HD screen, MediaTek MT6750 SoC, 3GB of RAM, 32GB of storage, 13-megapixel rear camera and 8-megapixel front camera. It's a hybrid dual-SIM model, and has a 3000mAh battery. It's also available in three colours - black, blue and gold.

Microsoft Edge preview for Android now avavilable
Microsoft surprised many people when it announced the impending launch of its Edge browser for Android as well as its own Android launcher. The news came at around the same time as the confirmation that Windows 10 Mobile is effectively being retired. The Edge browser has just gone live in the Google Play store for Android devices in preview form. The most compelling reason to use it is that it supports Microsoft's Continuum feature which will let you pick up where you left off across your phone and all your Windows 10 devices. Users who expressed interest in trying the preview will be able to download it now.

Honor 9i Goes on Sale in India via Flipkart: Price, Specifications, and More