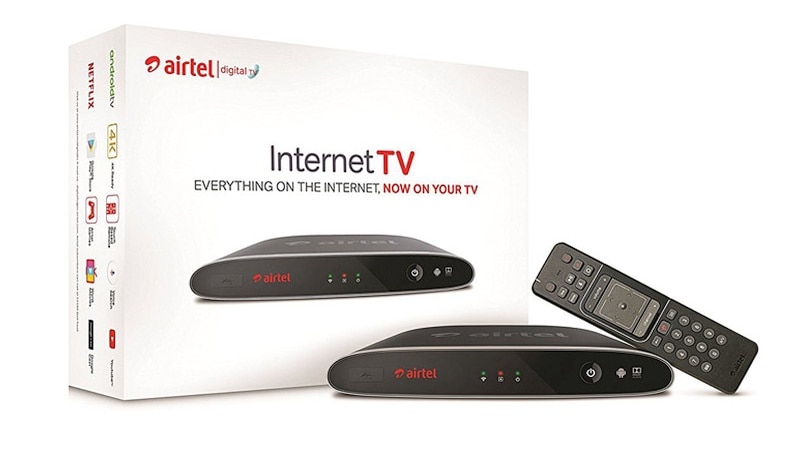 Airtel has launched Internet TV, a hybrid set-top box that supports 4K content, streams online entertainment services, and allows downloading of games and apps on TV. The company claims that it is the first hybrid 'DTH set-top box powered by Android TV' to launch in the country.

The Airtel Internet TV set-top box is priced at Rs. 4,999, and comes with three months subscription of Airtel's DTH service called Digital TV. It will be available exclusively on Amazon India starting today, and will be made available in offline stores soon after. Airtel says the Android TV box offers more than 500 satellite TV channels, and comes preloaded with Netflix, YouTube, Google Play Games, and Airtel Movies. Furthermore, users get full access to Google Play Store to enable installing Android apps and games on TV.

Let's look at other top stories of the day.

Samsung Galaxy S8 to launch without Bixby Voice on April 21
Samsung has announced that the Galaxy S8 and Galaxy S8+ will not ship with According to the statement provided by the South Korean company, the new flagship smartphones will be missing Bixby Voice at their global launch on April 21. This effectively means that Bixby will lack voice controls when the phones launch later this month. In an official update, Samsung has reportedly clarified that the new smartphones in the Galaxy line up will launch with Bixby features including Vision, Home, and Reminder. Notably, the digital assistant currently supports only English and Korean languages.

Xiaomi Mi 6 teaser released ahead of April 19 launch
Xiaomi on Wednesday released a fresh teaser for the Mi 6 flagship smartphone, which looks set to be launched on April 19. Along with the Mi 6, Xiaomi is expected to launch the Mi 6 Plus, featuring a bigger screen, at the upcoming event. The teaser comes with the tagline (translated) "You waited for 203 days, we waited for seven years," and it has a backdrop of a cityscape at the beak of dawn. The teaser doesn't reveal much about the device, except for reiterating the Xiaomi Mi 6 launch date. Xiaomi Mi 6 will be unveiled on April 19 in Beijing at the University of Technology Gymnasium, where the official price and availability details will be announced.

Google Pixel, Pixel XL to get Wi-Fi calling on Reliance Jio networks
In December last year, Google added the 'Enhanced 4G LTE Mode' to support 4G VoLTE calling in its Pixel and Pixel XL smartphones with Android 7.1.1 Nougat update. Google now says Wi-Fi calling will soon be coming to Pixel, Pixel XL smartphones on Reliance Jio networks with the next Nougat update. This feature will let you make calls even in low mobile network reception when connected to the Wi-Fi network.

For those who are not familiar with the Wi-Fi calling feature, it is similar to the VoLTE (Voice over LTE) feature, but uses Wi-Fi instead of mobile data. The Wi-Fi calling feature makes the use of Internet to connect calls, just like VoIP calling services like Skype. However, unlike VoIP, the call will be placed via your mobile number itself.

Sony Xperia XA1 with launched at Rs. 19,990
Sony has launched the Xperia XA1 smartphone in India at a price of Rs. 19,990, which is the successor to the Sony Xperia XA launched last year. The phone runs on Android 7.0 Nougat and supports dual-SIM slots (Nano + Nano). It features a 5-inch HD (720x1280 pixels) display, and is powered by a 64-bit MediaTek Helio P20 octa-core (quad core 2.3GHz + quad core 1.6GHz) SoC paired with 3GB of RAM. It offers 32GB of internal storage with the option to expand further using the microSD card slot (up to 256GB).

Xiaomi Redmi Pro 2 price leaked, may come in two variants
According to a new leak, the Redmi Pro 2 is expected to be priced starting at CNY 1,599 (roughly Rs. 15,000). Xiaomi was tipped to launch the phone last month, but that didn't happen. MyDrivers reports that a listing on online retail site Taobao reveals that the Xiaomi Redmi Pro 2 is priced at CNY 1,599 (roughly Rs. 15,000), however it is also available in a higher configuration variant for CNY 1,799 (roughly Rs.16,900). Previous leaks suggest that the device will be made available in 4GB RAM/ 64GB of inbuilt storage and 6GB RAM/ 128GB inbuilt storage options.

Moto C, Moto C Plus images and specifications leak
After launching the Moto G5 and Moto G5 Plus, it seems like Lenovo wants to focus on the budget segment, with leaks flowing in for the Moto C and Moto E series of smartphones. The latest leak is for the Moto C and Moto C Plus smartphones, which are reportedly targeted at first-time smartphone buyers and are the brand's "most affordable handsets ever". Both devices are expected to sport 5-inch displays. However, the Moto C Plus has been tipped to come with an HD screen resolution at 720x1280 pixels, but Moto C is expected to come with an FWVGA screen resolution at 480x854 pixels.

Google AutoDraw turns your doodles into meaningful sketches with machine learning
Google has released an artificial intelligence based bot called 'AutoDraw' that turns not so proficient doodles into meaningful sketches. It is available to play with right away on its website and will be accessible via smartphone, tablet, and PC. The new innovation from Google is based on learnings from its Quick, Draw! mini-game that used neural networks to recognise doodles. With the help of neural networks and machine learning, Google AutoDraw analyses your drawing and suggests different objects and sketches based on it from its database.

Western Digital's new G-Drive USB-C hard disk can charge your laptop
Western Digital has announced a new storage drive in its G-Technology series - 'G-Drive USB-C'. The company says that the new drive has been developed keeping "creative enthusiasts" in mind and features high-capacity storage and USB Type-C connectivity, which allows it to charge the latest range of USB Type-C equipped laptops, including the popular MacBook series.